The author, while complimenting Anna Hazare for his crusade against corruption and expressing unconditional support, questions whether going on a fast is the only way to get the Government to listen to popular demand. A progressive society like ours should develop better methods to determine public opinion says the author

You do not require a magic wand to combat corruption. One little finger raised by Anna Hazare is enough. The seventy four year old Gandhian showed the nation how purity of thought integrated in to right action can bring down a tyrant government to its heels.

The State machinery put this man in jail and ended up self locking themselves by their own misdoings. They did not want to give him public space to hold his peaceful rally for more than three days and set a cap for 5000 campaigners. And now, they are hastily cleaning a public ground themselves to make it fit for his rally for fifteen days without any limit set for the participants. 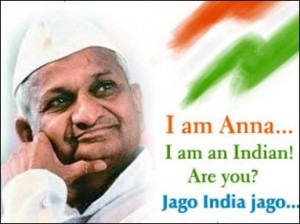 The Government has clearly put its foot in its own mouth. None of the legal luminaries in the government spokesmen could convince the common man on the street that power to determine a law rested only with the legislators and that the common man has no say there. Arvind Kejriwal, the RTI activist and Anna’s associate, speaking on behalf of the civil society, spelt out in clear terms that it was never their demand that only their model of the Lok Pal Bill should be passed in the Legislature.

On the contrary, their demand was that their draft of the Bill should also be presented in the Legislature for consideration as well. Ironically, none of opposition parties even ventured to introduce a private bill on Team Anna’s model though they vehemently opposed the treatment meted by the Government to Anna and his fellow campaigners. Their support for Anna was therefore superficial concealing it the only a hidden one point agenda- to bring government down rather than support Anna’s cause.

Anna is now on his fast. Across the length and breadth of this vast nation, there is presently no better and adorable leader than Anna. His integrity is unimpeachable.

All of us therefore unconditionally stand by him.

… is the Gandhian way of protesting by fasting the only way we can bring a people’s mandate in to a making? Do we have to fast while the corrupt politicians eat and belch? What happens if one of us dies on account of fasting?

But, assuming that he will succeed in achieving his purpose; several questions still crops up in our minds? Firstly, is the Gandhian way of protesting by fasting the only way we can bring a people’s mandate in to a making? Do we have to fast while the corrupt politicians eat and belch? What happens if one of us dies on account of fasting? As a progressive society, is there no way by which we can think of protesting in a better way than fasting and still achieve our ends? These are the questions we should also be asking ourselves. And by asking these questions, we are not committing any disrespect to our heroes – either Gandhi or Hazare.

Can we not have ballots conducted by independent NGOs agencies in which every protestor can cast his vote for Anna Lok Pal Bill in electronic counting machines under closed circuit camera surveillance and full television media coverage to the public eye with same safeguard measures against misuse of multiple voting as in the ballots in general and state elections ? This voting will also conclusively indicate the extent of people behind Anna and show to the ‘doubting Thomas’ Government that he properly represents the masses and his demands constitutes the mandate of the people. This ballot will be addition to demonstrations held on the streets and grounds – but with a difference. We will eat adequately and participate more strongly in the demonstrations. Believe me, when the corrupt politicians see this phenomenon, food will not go down their throats in fear and it is they who will starve while we eat heartily. Till we see this sunny day, happy fasting.

22 comments on “Anna Hazare’s one little finger is enough …..”