Penalty For Cash Deposit In Banks Declaring As Unaccounted Income?

Dr. Raj K. Agarwal & Dr. Rakesh Gupta have dealt with the controversial question whether the deposit of unaccounted high denomination notes in the bank can attract penalty under section 270A of the Income-tax Act, 1961 even though the said deposit is offered to tax in the return of income. The experts have explained the entire controversy in the proper perspective

Recently introduced Demonetization whereby currency notes of Rs. 500 and Rs. 1000/- have been declared as invalid legal tender with effect from 9.11.2016 is most likely to witness huge cash deposits in bank accounts within the window period expiring on 30.12.2016. Media reports have appeared attributed to Government sources that in case substantial amount of cash is deposited in banks declaring it as current year’s unaccounted income and applicable tax @30% plus surcharge etc. is paid, still penalty @200% of the tax can be imposed as per provisions of section 270A of the Income Tax Act, 1961. 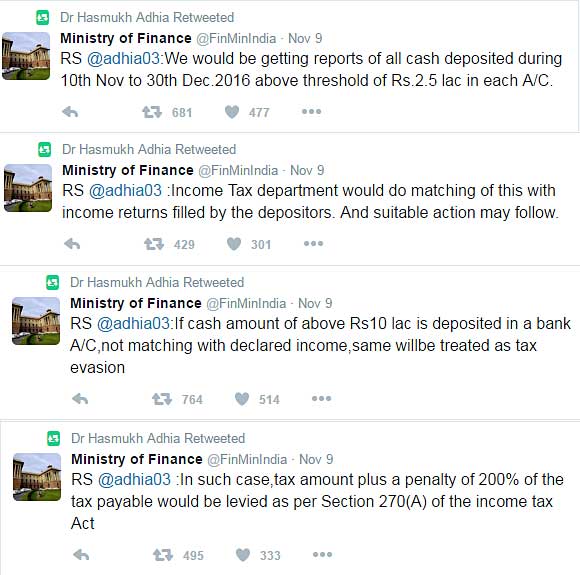 In a case when amount of cash deposit in bank is declared by the assessee in his return of income and applicable taxes are paid, there can be no penalty in our considered opinion under section 270A even if assessee is not able to substantiate source of earning such income since there is no tax evasion involved. Measure of penalty in case of under reporting or mis reporting is the difference between the returned income and assessed income. If such deposit in bank is declared as income in the return of income, obviously it would be assessed as such and in that scenario, there would not be any difference between the returned income and the assessed income. So where is the question of penalty being talked about?

Above interpretation of law may however not be accepted by the Government since it may defeat the objective of penalty provisions. It would also defeat the objective of Income Declaration Scheme wherein tax, interest and penalty on such cash deposit was required to be paid @45%. This situation may lead to intense litigation which may prohibit the citizens to make declaration of unaccounted income and payment of tax thereon, as the impact of 200% penalty would mean that the total tax and penalty would be more than 90% with additional fear of being prosecuted.

As per one estimate, total currency notes of Rs. 500 and Rs. 1000 in circulation was approximately of Rs. 14 lac Crores. Such currency notes are likely to be deposited by one or the other methods into the bank accounts by those holding them. In case legitimate method of declaring such amount as income and payment of taxes thereon is not available, people would tend to adopt dubious or undesirable methods and manners for deposit of such amount in the banks. In such a case, Government would not be able to collect its share of taxes and rather may find itself litigating with such kind of persons with no revenue collections.

Section 270A provides for the levy of penalty @200% in case of misreporting of income and @50% in case of under reporting of income. Therefore, to solve the above mentioned situation, it is suggested that Government may take a clear stand that such deposits would fall with in the meaning of under reporting requiring levy of penalty @50% of the tax amount. That would mean that Government may get tax, surcharge and penalty to the extent of around 50% of cash deposited/income declared. By doing so, there would not be any inconsistency with the scheme of Income Declaration Scheme where the tax, interest and penalty was 45%. It would create win-win situation for everybody. If such clarification comes from the side of the Government, people may be tempted to declare such deposited cash as income rather than adopting dubious methods. It would bring revenue collection to the Government and capital formation for the banks with the least possibility of litigation.

155 comments on “Penalty For Cash Deposit In Banks Declaring As Unaccounted Income?”