Prashant Bhushan launches a scathing criticism of the Vodafone verdict and argues that India will be seen as a “banana republic” where foreign companies can loot our resources and even avoid paying taxes on their windfall gains from the sale of those resources.

Prashant Bhushan, legal crusader, has launched a scathing criticism of the judgement of the Supreme Court in Vodafone International vs. UOI. In an article published in the Hindu, Prashant Bhushan argues that the Supreme Court has again made a wrong call on tax avoidance and set a precedent that jeopardises thousands of crores of potential revenue for the exchequer.

Prashant Bhushan points out that tax avoidance through artificial devices has become a very lucrative industry today and that a large part of the income of the ‘Big 5′ accountancy and consultancy firms is derived from such schemes. McDowell 154 ITR 148 (SC) had put the issue in the correct perspective, though two later decisions (Azadi Bachao Andolan & Wallfort) reverted to calling artificial tax avoidance devices “legitimate tax planning” rues Prashant Bhushan. 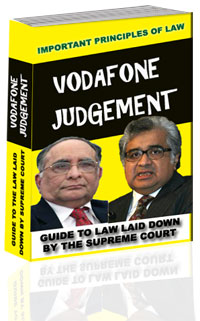 Prashant Bhushan contemptuously calls Mauritius companies set up by third-country foreign companies as ‘Post Box Companies‘ and says that the benign attitude of the Indian tax authorities has resulted in “blatant evasion“. He also singles out Yashwant Sinha, the then Finance Minister, for responding to the distress call of the FIIs and issuing the circular which stated that once a company had obtained a tax residence certificate from Mauritius, it would not be taxed in India. The government’s appeal against the verdict of the Delhi High Court which had struck down the Circular effectively offered a tax holiday to the FIIs rues Bhushan. The consequent judgement of the Supreme Court (Azadi Bachao Andolan 263 ITR 706 (SC)) which called this device an act of legitimate tax planning was in defiance of the Constitution bench judgment in McDowell 154 ITR 148 (SC) says Bhushan.

Prashant Bhushan rues that though in Vodafone, the Supreme Court had the opportunity to correct the transgression of the McDowell 154 ITR 148 (SC) principle, it did not do so. Instead, the Court held that despite the fact that the entire object and purpose of the transaction between Hutch and Vodafone was to transfer the shares, assets and control of the Indian telecom company to Vodafone, the transaction has nothing to do with the transfer of any asset in India!

Prashant Bhushan calls this approach a “welcoming wink” towards tax avoidance devices and says that it is unlikely that any foreign company would be called upon to pay capital gains tax in future in India. This jeopardizes thousands of crores of tax revenue, and the future attitude of courts towards innovative tax avoidance devices.

Prashant Bhushan is not able to resist the temptation to contrast the Vodafone verdict with the 2G telecom verdict. He says that there is a “sharp contrast” and that the latter judgement “enforces the constitutional principle of equality and non-arbitrariness“.

Prashant Bhushan signs off with the warning that our courts must send the clear signal that India is not a “banana republic” where foreign companies can be invited to loot our resources and even avoid paying taxes on their windfall gains from the sale of those resources.