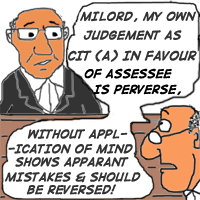 The author warns of a serious conflict of interest in permitting serving Commissioner (Appeals) to argue appeals on behalf of the Department before the ITAT. He argues that no person can be a judge and a lawyer at the same time.

The Hon’ble Apex Court in Anil Rai vs. State of Bihar (2001) 7 SCC 318 has observed that justice should not only be done, but also should appear to have been done.

A judge when he is discharging his duties as a judge cannot be asked to represent the matter before the Court as a representative of the Government. Similarly a Commissioner of Income Tax (Appeals) should not be given the responsibility to represent the Department, when he functions as quasi-judicial authority.

It is the duty of the professional organizations to bring to the notice of the higher authorities that when a Commissioner of Income Tax (Appeals) functions as a quasi judicial authority he may not be deputed to represent the matters before the Tribunal.

We are of the considered view that if it is brought to the notice of CBDT it would certainly take an appropriate remedial measure.

Members may send their view to the office of the Federation.

2 comments on “Conflict of interest!!”