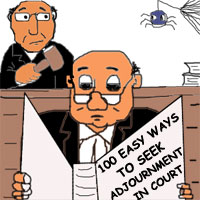 The author lashes out at the tax department for stonewalling the sincere efforts of the Court to reduce the arrears of tax matters by seeking repeated adjournments. He points out the problem areas and also outlines practical suggestions to help the department overcome its perennial drawbacks.

City of Mumbai contributes 40% of Direct Taxes revenue to Government of India. Also more than 40% of tax litigation is from the city of Mumbai. Significantly more than 70% appeals and references pending before the Bombay High Court are from the Revenue. It is on record that more than 4,000 tax appeals were filed late necessitating condonation of delay first before the matter can be taken up for hearing. To reduce the pendency of notices of motions filed by the tax department the Hon’ble Chief Justice of Bombay High Court allotted the work to eight tax benches. Tax Bar is of the considered view that by end of August at least all the notices of motions may be disposed of. More than 2,000 Tax appeals were pending for admission since 2002. To reduce the pendency, all tax appeals have been allotted to four tax benches. Tax Bar has made representation to the Hon’ble Chief Justice to have only one tax Bench dedicated to direct taxes and one tax bench for other taxes. Hon’ble Chief Justice has agreed with the view of the Tax Bar and constituted a tax bench only for hearing tax appeals and references and it is working very satisfactorily and is able to dispose large number of tax appeals and references. However, the Bar is of the considered view that instead of having four tax benches, if all pending notices of motion, tax appeals are transferred to one tax bench which is hearing the tax appeals and references, the disposal will accelerate and it will also help the tax administration to improve co-ordination and effective representation. This will prevent the embarrassing situation of different Benches taking different view in respect of identical issue.

We are of the considered opinion that the tax department should have their “own tax litigation cell” which should be managed by an independent law firm. This will ensure continuity of proceedings and better representation before the Court. Asking an individual lawyer to file the vakalatnama may not serve the desired object. Reason being a particular lawyer may be in the panel of tax department as on day one but once the appeal is admitted it may come for final hearing after two or three years and the lawyer who has filed the vakalatnama may not be in the panel and the department may not renew his appointment. In such situations, entire process of filing fresh vakalatnama has to be followed. If a law firm is appointed for filing a vakalatnama there will be continuity and counsel may be appointed from the panel depending upon the nature of litigation.

The Hon’ble High Court had called the Chief Commissioner and Commissioner Judicial and directed them to take remedial measures. Yet it seems till recently the compliance is not at all satisfactory. We apprehend that the day may not be far the court may have to issue notice to Chairman of CBDT or the Hon’ble Finance Minister to take remedial measures !

One of the reasons according to the Hon’ble Law Minister for proposed National Tax Tribunal is Courts are not disposing the tax matters for years. However, if one analyses the causes for the pendency of tax matters before the Court pendency is only due to absence of effective and efficient handling of the tax matters before High Court by the Revenue. There are large number of tax references which have been referred by the Tribunal to the High Court but still they are not numbered and hence, may not come on the board at all. Who is accountable?

It has been observed that, some of the panel lawyers of tax department are not well-versed with the procedure aspect of tax, appeals, references and writ petitions; hence, it may be desirable to have a workshop or seminar to understand the law and procedure, which can be chaired by the tax judges of High Court. Members of Tax Bar and Tax Administration may be requested to participate in the discussion. We sincerely feel if such a workshop is held every year, it will help the judiciary, tax administration and assessees.

It may be appreciated that the Bar Association has also prepared a fact sheet, (published in AIFTP Journal April, 2008 issue at page No. 51) which can be filled and filed along with the tax appeal. This will help grouping of tax appeals saving precious time of the Court, assessee as well as the tax administration and time saved may be utilized for productive purposes.

We hope the tax administration will act positively considering the tax-payers money involved. If tax administration improves the precious time of the court can be utilized for reducing the pendency of other matters before the Court and floating of one more forum averted.