Home › judiciary › Dear Govt, Will You Act To Save ITAT Only After High Court Reprimands You?

Dear Govt, Will You Act To Save ITAT Only After High Court Reprimands You? 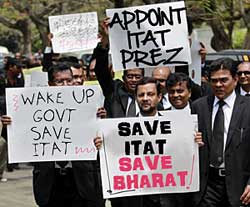 “The Central Government shall appoint –

(a) a person who is a sitting or retired Judge of a High Court and who has completed not less than seven years of service as a Judge in a High Court; or

The ITAT has to deal with revenue matters wherein the Government is always a party either as a respondent or as an appellant. It is desired that a person may be appointed from amongst persons of integrity and outstanding ability, having special knowledge of, and experience in problems relating to direct taxes and business accounts. I therefore suggest the following for the kind consideration of all stakeholders:

1. It is desired that the collegiums headed by the Chief Justice of India or senior judge of Apex Court, may select the best suited person to be the President of the ITAT;

2. It is desired that the Chief Justice of the respective High Courts may be requested to forward to the chairman of the selection panel, the names of those Judges who sat on the tax bench for at least three years and who have retired or may be retiring very soon, for being considered for appointment to the post of President of the ITAT;

4. The Collegiums, if desired, may get the feedback from the senior professionals who regularly appear before the High Courts and the ITAT.

I am of the view that by this process, the collegiums may be able to select the best suited person to head this institution.

The functioning of the ITAT cannot be compared with other Tribunals due to a limited number of Benches in these Tribunals. Whereas the Income-tax Appellate Tribunal has sanctioned strength of 126 members and it has Benches in 27 cities across the country. The ITAT Bar Association, Mumbai (“ITAT Bar”) and All India Federation of Tax Practioners (“AIFTP”) have made a representation to the Select committee that in the interest of the ITAT, it is always desirable that the President must be selected amongst the Senior Vice-President and Vice-Presidents. It may be appreciated that the job of a President involves not only discharging judicial duties but also dealing with matters of administrative importance. Normally, a Member is appointed as the President after serving more than 20 years in the Tribunal. As a member, he is transferred at least once every four years. When a person is so appointed, he is fully aware of the functioning of the various benches of the Tribunal and the knowledge and integrity of each and every Member. This makes it easy for him to discharge his administrative duties more efficiently.

It is very unfortunate that ever since the former President Shri Vimal Gandhi retired on 3-6-2010, the Ministry of Law and Justice, Government of India (the “Ministry”), for reasons best known to them has not initiated the proposal to appoint a Permanent President. Similarly, the post of the Senior Vice-President and posts of Vice-Presidents have also not been filled up. This has greatly affected the smooth functioning of the institution. In the interest of this institution and its better administration, it is desired that a Permanent President be appointed at the earliest by the Committee headed by a Judge of the Apex Court as per the due process of law. The representations made by the ITAT Bar and the AIFTP requesting the Ministry to make these appointments have not yielded any positive response. It appears that the only hope for the Bar Associations is to approach the High Court. When there was a threat to the independence of the institution, the ITAT Bar filed a public interest litigation petition (“PIL”), and due to judicial intervention, the independence of this institution was not allowed to be compromised [Ajay Gandhi and others v. B. Singh (2004) 265 ITR 451 (SC)/ Income–tax Appellate Tribunal v. V. K. Agarwal (1999) 235 ITR 175(SC)]. If the President and the Vice–Presidents are not appointed within a reasonable time, the Tax Bar may have to ring bells of the Court again by filing PIL in this respect. The Tax Bar has a great responsibility in ensuring the independence of the institution and in making sincere attempts in retaining its distinction as one of the finest institutions in this country and as a quintessential model for other institutions to emulate.

Readers may send their views by e-mail or by letters to the Office of the Federation which may help the Federation to make an appropriate representations to the Ministry in this regard.

Reproduced with permission from the AIFTP Journal, July 2013

7 comments on “Dear Govt, Will You Act To Save ITAT Only After High Court Reprimands You?”