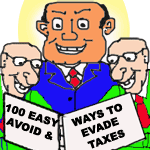 The author does some soul-searching to discover the reasons why fellow-Indians do not pay their taxes honestly even though they know it is their constitutional duty to do so. He argues that the poor policies of the tax administration, which puts defense-less taxpayers at the mercy of corrupt officials, are responsible for this sorry state of affairs and suggests a few solutions to set things right.

1. Article 51A of the Constitution of India refers to various fundamental duties of every citizen of our country. One of the duties referred in the said Article is “to strive towards excellence in all spheres of individual and collective activity, so that the nation constantly rises to higher levels of endeavour and achievement”. The fundamental duties are not enforceable by mandamus or any other legal remedy but it has to be cultivated by the citizens and requires to be taught to the children from the beginning. Paying tax rightfully due to the State is also the duty of the citizens. However, people are reluctant to pay the taxes. Four main reasons why people of our country are not paying the taxes are:-

(a) When an assessee files the return he will be subject to harassment by the tax administration, if the matter is selected for scrutiny. Returned income may be only Rs. 2 lakhs, assessed income may be of Rs. 50 lakhs. Assessee may succeed in appeal, however, no question will be asked to the assessing officer why such huge additions were made.

(b) On the other hand against those who are not filing the returns, the Government has no machinery to check tax evasion. Tax evaders will always feel that the Government will bring some Amnesty Scheme to them some time or other. From 1951 to 1998, about 13 Amnesty Schemes have been introduced.

(c) Citizens feel that tax collected are not utilised for the welfare of the State. The entire tax collections are utilised by the Government only for paying the salary to its employees and interest on its borrowings. After 62 years of independence still the Government is not able to provide, proper power, water, hospitals, education, infrastructure, etc.

(d) There is complete lack of transparency and the accountability in the administration of the Government in respect of expenses relating to unproductive purposes.


2. The jumbo sized Ministries of various State Governments is eating away the entire corpus of the State and there may not be any finance with the State Governments for the welfare of the State. In Singapore, even the tap water can be used for drinking. However in our country, even after 62 years of independence we are not in a position to provide pure drinking water to the citizens of our country. This shows how we are neglecting the health of citizens of our country. Not a single political party had any agenda on the above issues.

3. In Mumbai, we have witnessed that crores of rupees which is rightfully due to Government as tax is lost due to delay in filing of appeals before the High Court. In spite of repeated request by the respective tax benches of High Court not much progress is done to improve the filing system of appeal before High Court. Department which is biggest litigant before the High Courts and Supreme Court, however, don’t have their own legal department to monitor the various tax matters before the High Courts. Federation made an appeal to the Chairman of CBDT to form a separate legal department for the tax administration which can help the court in quick disposal of tax matters. Federation hopes that with new government the things may improve.

“An honest revenue official says “The honest are hounded; they are humiliated; they are ignored; they are manipulated; they are used; they are punished; they become the laughing stock in society and in their families; even their very honesty is suspected. In spite of that, there are many many honest officers in the department who remain honest against all adversities. They are a special species; they have to be preserved and protected. Ladies and Gentlemen! I have highlighted two burning issues of the day haunting the economy of the nation – (i) the ill-planned budgets, and (ii) the corruption. Laws alone cannot prevent the commission of a crime. Nor can a tax-payer who is placed like lamb before a corrupt official who is like a wolf, fight against corruption. It is a combined, united and forceful effort of the tax practitioners that can do a lot for preventing corruption. So also you can exercise your influence in shaping the Budget and thereby the economy and welfare – destiny of the nation”.

Hon’ble Mr. Justice S. H. Kapadia, Judge of Supreme Court then as Judge, Bombay High Court in his inaugural address at the National Convention at Mumbai on 24th December, 2002 made an appeal to the Federation to cultivate to perform its duties to the country.

5. The Federation fully endorses the view of Hon’ble Mr. Justice R. C. Lahoti and Hon’ble Mr. Justice S. H. Kapadia and appeals to its members to follow the message and also work for bringing transparency and accountability in tax administration, so that the honest tax-payers and honest tax officials are not harassed.

6. No body knows how many crores of Black Money is in circulation in our country. Black money generates due to failure on the part of Authorities to discharge their allotted duties properly. The citizens of our country are very much concerned about the increase in Black Money. This virus called ‘Black Money’ is eroding the entire social fabric of our nation and it is therefore necessary for all of us to fight for its eradication. The problem is not only to be viewed from the angle of the amount of direct taxes lost by the Revenue, but also from the angle of the magnitude of its evil offshoots affecting the very values of life. The ways and means to eradicate the said virus, requires national debate and the repeated disclosure schemes will not help in its eradication but is only a temporary fill-up to revenue. Accountability and efficiency in tax administration is the only alternative to unearth black money.

7. The money sent abroad whether in the Swiss Bank or other country if it is proved that it has been taken outside the country through illegal means every effort must be made to bring back to the country but not by introducing one more amnesty scheme.

8. We hope the tax administration will make an honest attempt to change the mind set of tax officials from tax collector to tax service and we also hope that new government will make a sincere attempt to unearth the black money so that, the tax evaders be brought under tax net.

9. In these circumstances, the professionals can play a positive role by taking advantage of Right to Information Act, to bring transparency and accountability as regards the finance and the administration by bringing to the notice of the administration by way of representation, media and by filing public interest litigation petitions. According to us, this will be one of the duties to the nation as referred in the Article 51A of the Constitution of India. The Federation makes an appeal to the tax professionals to guide the citizens as regards fundamental duties as referred in Article 51A of the Constitution of India to make better India.