Home › judiciary › Independence Of ITAT Is Under Threat. We Have To Save It: Tax Lawyer

Independence Of ITAT Is Under Threat. We Have To Save It: Tax Lawyer 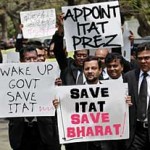 Dr. K. Shivaram, Senior Advocate, has referred to a number of recent incidents which show that the ITAT is no longer as independent as it used to be in the past. He warns that if the ITAT loses its independence, taxpayers will lose confidence in the institution and this will have a debilitating effect on the administration of justice. He has called upon the Tax Bar to rise to the occasion and save the ITAT from Governmental interference

The Independence of the Income Tax Appellate Tribunal is the need of the hour for effective administration of justice – The Tax Bar has a greater responsibility to strengthen the independence of the mother Tribunal and to promote an unpolluted justice delivery system.

The Honouarble Mr. Justice Chelameswar, the Second Senior most Judge of Supreme Court of India, while delivering the address on “Rule of law and Role of the Bar“ on 13th April 2018 at Nagpur to the High Court Bar Association of Nagpur, stated that “If the judiciary is not strong, independent, efficient and non-responsive to social problems of the day, nobody in this country is safe”

We are of the opinion that the Tax Bars across the Country may have to debate upon how bureaucracy has indirectly curtailed the independence of judicial fora like the Income Tax Appellate Tribunal and how to strengthen the judicial independence of the Income Tax Appellate Tribunal and to promote an unpolluted justice delivery system. The following incidences are an eye-opener for the citizens and taxpayers who are concerned with Independency of judicial and various quasi judicial forums.

1. Attempt to shift head quarters of the Income Tax Appellate Tribunal from Mumbai to Delhi

The ITAT Bar Association, Mumbai, took strong objections and sent detailed representations. On the basis of the representation made, Honourable Shri Atal Behari Vajpayee then as the Leader of Opposition (Lok Sabha) opposed the transfer of head quarters of ITAT from Mumbai to Delhi and wrote a letter to the then Minster of State for Law , Justice & Company Affairs, Govt of India and accordingly the move to shift head quarter to Delhi was stalled.

It was again the ITAT Bar Association Mumbai, which filed a PIL before the Bombay High Court and the notification was stayed.

3. Residential Accommodation to Members of the Income Tax Appellate Tribunal.

It is the ITAT Bar Association Mumbai which filed a PIL before Bombay High Court praying that all 12 Benches are desired to function from one place only.

5. Constitution of National Tax Tribunal by way of Ordinance to take away the powers of the High Courts to decide substantial question of law

The Tax Bar across the country including the AIFTP and ITAT Bar Association, challenged the said ordinance and a stay was granted subsequently. The Ordinance lapsed.

In the year 2004, the Govt. once again introduced the National Tax Tribunal Bill, 2004 (2004) 271 ITR 50 (St) which was referred to the Parliamentary Committee on Personnel, Public Grievances, Law & Justice.

The AIFTP also made a representation before the Committee. The Committee was fully convinced that the National Tax Tribunal is not the solution to reduce the tax litigation before various High Courts.

In spite of the reports of the select committee, the Govt. passed the Bill. The said Act was once again challenged before various High Courts. The AIFTP was one of the petitioners which had filed the petition before the Bombay High Court and a stay was granted. Ultimately Apex Court also struck down many provisions of the National tax Tribunal. [Madras Bar Association v. UOI (2014) 368 ITR 42 (SC)].

In the Year 2013, the Govt. amended S. 253 of the Act wherein the Retired Judge of High Court who has completed not less than seven years of service as a Judge in a High Court could also be considered to be appointed as President of the ITAT. ITAT Bar Association Mumbai and the AIFTP has strongly opposed to such proposal.

Shri S. E. Dastur, Sr. Advocate and eminent jurist in his article which is published in www.itatonline.org has stated as under;

“Pursuant to the newly acquired power vested in it in 2013 the Central Government appointed a retired judge of a High Court to be President of the Tribunal with effect from 14th March 2015.

In my view, the conferment on the Central Government of the option to appoint a retired judge as the President is misconceived.

The President has to perform various administrative tasks relating to the function of the Tribunal such as constitution of Benches, the posting of Members etc. which requires him to be a person who has worked as a Member for long period of time before he assumes office charge as President.

The President is also a part of the committee to select persons as Members of the Tribunal. An existing Vice-President and more so senior Vice-President, would be fully experienced to discharge these functions.

A retired High Court judge is not likely to be aware of the of the plethora of judgements, reports, magazines etc. dealing with tax matters. Speaking myself I do not think the experience of appointing a retired High Court Judge as the President of the Tribunal was at all successful”

8. Legislation to appoint the Members of the Income Tax Appellate Tribunal on tenure basis for three years

Though the selection process of the Members of the ITAT is undoubtedly one of the best methods followed there could be further improvements in the process of the appointments.

Instead of improving the process, the Govt proposed to make an amendment in the Finance Act 2017 by introducing S. 184 of the Finance Act, 2017, where appointment of the Members is on tenure basis.

This amendment had been challenged and is pending before the Apex Court. If the appointment of the Members of the Income Tax Appellate Tribunal is made on a tenure basis, it will destroy the institution and Members will be at the mercy of the Govt. for the renewal of their tenure, which will affect the independency of the Institution.

In the interest of the institution, the Govt. should continue the appointment of the Members of the ITAT on permanent basis and not on tenure basis.

9. Non-appointment of the President on a regular basis

On 17-02-2017, the Govt. appointed one of the Vice–Presidents as an officiating President, whose term is renewed from time to time.

Therefore the need of the hour is the appointment of a President of the ITAT on a regular basis in the interest of the institution.

10. Not appointing the Vice–Presidents and Members of the Income Tax Appellate Tribunal

The sanctioned bench strength of the ITAT is 63 Benches (126 Members) which are functioning from 29 places. For the sake of administrative convenience, the Income Tax Appellate Tribunal is divided into 10 zones.

Non appointment of the Vice-Presidents on time demoralise the Members who are due for promotions as Vice-Presidents. The sanctioned strength of the ITAT is 63 benches (126 Members) whereas today there are 95 Members active of which 5 will presently retire hence at the end of 2018 there will be vacancy for 36 Members.

There is also inadequacy in the number of staff and Assistant Registrars appointed, which has affected the functioning of the Tribunal.

Total pendency of appeal before the ITAT on 11-2018 is 91,657 appeals (2018) AIFTPJ January. P. 73. It is desired that the assessee is able to get the justice within six months of the filing of an appeal from the final fact finding authority.

By not appointing a regular President, Vice–Presidents, Members and not providing the desired infrastructure the motto of the Tribunal is “Impartial easy and speedy justice” cannot be achieved.

In Mumbai, more than 10,000 appeals are pending before the High Court for final disposal. The delay in disposal of the cases before High Courts is mainly because of the delay in appointment of Judges and not providing required infrastructure.

We hope the Govt. will give work on a war footing to fill the vacancies in the Judicial and quasi forums. The need of the hour is it is that the Bar which should play a proactive role by sending objective suggestions to the Govt. if the representations are not considered, we may have to ring the bell of the Courts.

A thought for debate

Reproduced with permission from the AIFTP Journal, May 2018

7 comments on “Independence Of ITAT Is Under Threat. We Have To Save It: Tax Lawyer”