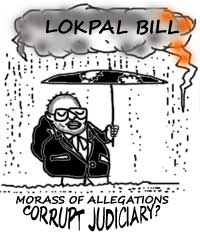 The author adds his voice of reason to the strident debate on the pros and cons of the Lokpal bill. The author argues that while the proposal to bring the judiciary under the scrutiny of the Lokpal is well-intentioned, it will adversely affect the fearlessness and independence of the judiciary and have disastrous consequences. Instead, the author suggests measures to curb corruption in the judiciary.

In India common citizens have full faith in the Judiciary, but their objection is against the Judiciary is delay in justice delivery system. Therefore, one need to take remedial measures to reduce the pendency of cases before various Courts. Mere introduction of Lokpal Bill may not have much impact on the present system. According to me, the legislature alone is responsible for delay in justice delivery system, because they have not increased the strength of judges and have also not been filling up the vacancy of Judges.

Those, who attack the judiciary, must remember that they are attacking an institution which is indispensable for the survival of the rule of law but which has no means of defending itself. In the very nature of things it cannot engage itself in an open war, nor indulge in releasing contradictions

Hon’ble Mr. Justice F. M. Kalifulla, Acting Chief Justice of Jammu and Kashmir, while addressing the seminar on mediation orientation programme on 5th June 2011 said “There is need for 1500, High Court Judges and 20,000 judges in the subordinate Courts to clear the rising pendency of cases in various courts of the country”. Our Country needs as on today at least 6750 more judges to clear the pendency of cases, however, nobody is addressing this issue. If these two factors are taken care of, automatically the pendency will reduce and the citizens will get speedy justice. In revenue matters 70% litigations are at the instance of Government, mainly because, nobody would like to take the responsibility. Today, the judges are able to take the decision without any fear or favour mainly because they are protected under the Constitution of India. If their action is questioned due to some allegations made by people having some vested interest, it will affect justice delivery system. When certain allegations are made against judicial officers they cannot rush to the press, they cannot give any statement in their defense, where as the Government officials and ministers and Prime Minister can give press release and public statement etc. In M. R. Parashar vs. Dr. Farooq Abdullah AIR 1984 SC 615 while dealing with contempt proceedings the then Chief Justice of India Mr. Y. V. Chandrachud stated as under:-

We would like to remind those who criticise the Judiciary that it has no forum from which to defend itself. The legislature can act in defence of itself from the floor of the House. It enjoys privileges which are beyond reach of law. The executive is all powerful and ample resources and media at its command to explain its actions and, if need be, to counter attack. Those, who attack the judiciary, must remember that they are attacking an institution which is indispensable for the survival of the rule of law but which has no means of defending itself. In the very nature of things it cannot engage itself in an open war, nor indulge in releasing contradictions. The sword of Justice is in the hands of Goddess of Justice, not in the hands of mortal judges. Therefore, Judges must receive the due protection of law from unfounded attacks on their character

Corruption is a cancer eating into the roots of the society. It is difficult to fight against corruption because the chances of success are bleak but this is no reason for despondency. Nobody is born corrupt; it is the vitiated atmosphere in the society and the system of governance which converts the clean into the corrupt

Judicial independence is back bone to preserve the mandate of Constitution of India. If there is any interference, it will have greater impact on the democracy. Bringing Judiciary within the scope of Lokpal Bill may be against basic structure of Constitution of India and it will be a black day in the Indian history, because it will affect the independence of the entire judicial process. I am of the firm opinion that Judiciary should be outside the purview of the Lokpal Bill.

As regards corruption, Hon’ble Mr. Justice R. C. Lahoti, Former Chief Justice of India while addressing a conference on 7th September 2002 at Jaipur on the issue of Corruption, stated as under:-

Kautilya says in Arthashastra — “To know if government officials handling the treasury are stealing public money or not is as difficult to detect as whether a fish is drinking water or not. The collection of’ incidents of corruption from several news reports highlights features of corruption in revenue: (i) there is a sudden spurt in instances of corruption (ii) the corruption is showing its origin at the top and percolating downwards (iii) there is a tendency to protect the corrupt and hound the honest (iv) excepting highlighting the issue in media there is no revolt nor remedial steps taken against corruption; people are getting used to corruption as a necessary evil of the system or a ‘part of life’. I am amazed at the patience of Indian people who endure injustice and unfairness with servility and resignation. We bear the torture of the laws and fatality of corruption and endure ourselves in such circumstances which would lead to bloody revolution in any other polity. Corruption is a cancer eating into the roots of the society. It is difficult to fight against corruption because the chances of success are bleak but this is no reason for despondency. Nobody is born corrupt; it is the vitiated atmosphere in the society and the system of governance which converts the clean into the corrupt. An honest person resists corruption but allurements and temptations at times prevail upon him and once corrupt, even an honest person prefers and finds it convenient to stay corrupt. The seeds of corruption are sown in the mind of the man and the cure, if any, lies in eradicating the seeds of corruption from his mind. An honest revenue official says “The honest are hounded; they are humiliated; they are ignored; they are manipulated: they are used, they are punished; they become the laughing stock in society and in their families: even their very honesty is suspected. In spite of that, there are many honest officers in the department who remain honest against all adversities. They are a special species; they have to be preserved and protected

Hon’ble Justice Lahoti gave more than 25 instances of corruption based on the paper reports which was published in a span of six months. Though more than 10 years have passed, nobody knows the fate of all these cases. If the Government had taken some remedial measures on the basis of speech delivered by the then Chief Justice of India, possibly we could have avoided all the present episodes which have   taken place in the last few months. As there is no speedy disposal of cases there is no impact on the corrupt people. Even the media has not played any role to find out what is the fate of all these cases. Therefore, the proposed Lokpal Bill must provide that all the cases relating to corruption must be heard and disposed of within one year. This is possible if there is increase in the number of Judges constituting the Courts. Unless the Government appoints the required number of judges, it is impossible for the judiciary to dispose off the pending cases. I am of the opinion that before bringing the Act, appoint new judges and create infrastructure and environment which will enable the courts to quickly dispose off the matters pending in Courts. If the assessees are able to get the finality to the assessment at least within two years of assessment, I am sure many assessees will not indulge in unethical practice and will prefer to fight the matter in Courts.

Former President of India Dr. A.P.J. Abdul Kalam said “Establishing a corruption-free India is a major challenge. I propose a youth brigade as the solution. ‘I can do it…We can do it; India will do it, should be the spirit,”

War is fought against enemy country, where as in corruption one has to fight against own people. It is not so easy, however, let us make an honest attempt to have corruption free India.

I am of the opinion that the intellectuals and professional organizations must study the Lokpal Bill and should send their suggestions objectively, so that the Bill can serve the desired objectives. My suggestions are as under:-

(1) Judiciary should be outside the purview of Lokpal Bill.

(3) On making enquiry if the memorandum is held to be without any basis and with the intention to bring discredit to the reputation of particular person or institution the person who makes the memorandum must be held guilty and must be made punishable.

(4) There has to be specific provision to deal with contempt proceedings with the Lok Pal.

I do appreciate the concern of Civil liberty but merely bringing law is not the solution, rather providing required infrastructure and facilities so that there can be effective justice delivery system, is what is required.

We are having finest judges whose integrity is beyond reasonable doubt and they are following the mandate of Constitution of India and deciding the matters without any fear or favour. I, therefore, appeal to the professionals to send suggestions to the proposed Committee urging them not to include judiciary in the proposed Bill.

Reproduced with permission from the AIFTP Journal, June 2011

5 comments on “Judge No Judge”