Home › judiciary › No funds for the temple of justice …

No funds for the temple of justice … 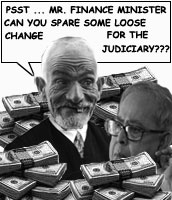 The author is aghast that while the Finance Minister has been generous in providing funds to the other sections of society, he has totally overlooked the judiciary. He implores the Government not to ignore the judiciary and warns that unless financial independence is given to the judiciary, judicial reforms are not possible.

Judiciary is guardian of our democracy. The common man has faith in the temple of justice. Only one criticism against the judiciary is that there is delay in disposing of the matters. Delay in disposal of matters are not on account of judges fault, it is only due to shortage of judges and lack of infrastructure. When world is becoming one global village, the judiciary also requires to keep pace with modern technology. The judiciary is neither having any political lobby to take up the cause of judiciary with the government when the allocation of fund is required to be made for modernisation and innovation nor they can make representation to Government. Therefore, it is very essential for the Government to allocate in each years budget a specific amount for the research in law and modernisation of judiciary. 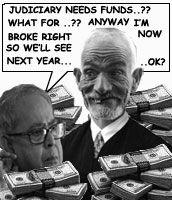 In one of the conference, former Chief Justice of Bombay High Court stated that, if court requires four additional staff members, if requisition is sent, the reply comes sanctioning only two staff members after a year by which time the requirement goes up to 10 staff members. If this is the position for simple appointment of required staff, we can imagine how difficult it could be to manage the administration of judiciary. According to us, there has to be research and road map for judicial reforms. Taking into consideration of present pendency and future litigation, a specific amount must be allocated to the judiciary and when the requisition is made by the Chief Justice the amount must be released with in a reasonable time. Unless financial independence is given to the judiciary, the reform in judiciary is not possible. We, therefore, suggest that as we are having knowledge commission, there has to be a judicial reform committee, headed by Chief Justice of India and the committee may include Minister of Law, Chief Justices of High Courts, representatives of professional organisations and eminent citizens who are expert in the technology. The committee should meet at least once in three months, should try to get the views of citizens & members of committee should also visit the various places to witness the ground realities. This will enable the Government to bring the judicial reforms which will help the citizens of the country to access to speedy justice from all the courts and quasi judicial authorities.


Like every year, this year’s budget also is full of promises and very little on accountability. Unless the concept of accountability as suggested by Dr. Raja J. Chelliah (1992) 197 ITR 257 (St.) is introduced whatever may be the law, the honest tax payers may have to undergo the process of litigation to get the refund or to get the correct assessment. Late Shri N. A. Palkhivala Government has collected total of Rs. 20,229 crores from 2004 to 2007 by way of educational cess, however only Rs 5830.67 crores was spent through Sarva Shikshhan Abhiyan and Rs. 2,911 crores on Mid day meal. This shows the money collected for education is not being utilised for the purpose of education. Similarly, there is no accountability on the part of many officials because of whose negligence appeals are not filed within due date. The Courts have rejected number of appeals, where the stakes involved are in crores. Unless the concept of accountability is introduced, the trend will continue year after year. It is therefore, suggested that when new income tax code is introduced there has to be a provision for accountability on the part of tax administration as recommended by Dr. Raja Chelliah Committee.

4. Power to condone the delay in filing of an appeal before High Court

The Bombay High Court in CIT vs. M/s. Grasim Industries Ltd. Notice of Motion No. 781 of 2009 by its judgement dated 8-7-2009 (Source: www.itatonline.org) has held that the High Court has no power to condone the delay in filing of an appeal following the decision in the case of Commissoner of Customs & Central Excise vs. Hongo India (P) Ltd. & Anr., (2009) 223 CTR 225 (SC) / (2009) 236 ELT 417 (SC). The Court observed that they had no option but to dismiss the petition for condonation of delay in view of the aforesaid decision of the Supreme Court. As far as Central Excise Act is concerned, an express provision is made by amending the law retrospectively to empower the High Courts to condone the delay in filing appeals, applications and memorandum of cross objection beyond the time limit provided for, when the Court is satisfied that there is sufficient cause for the delay. In the interest of revenue, it is very essential to grant the power to condone the delay by amending the section of Income tax Act similar to that of Central Excise, otherwise the Government may loose crores of rupees only due to delay in filling of appeals before High Court.

We hope the Hon’ble Finance Minister will consider the suggestions objectively.

One comment on “No funds for the temple of justice …”