Chanakayagiri & The Art Of Tax Recovery 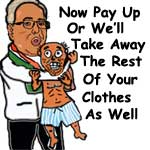 The author expresses concern over the rampant use of rough-neck techniques by the Department for recovery of tax dues. Despite severe reprimand by Courts, there is no improvement in the Department’s behaviour due to lack of accountability muses the author. The author advises the department to adopt Chanakya’s techniques for recovery and assures that this will benefit the department in the long run

1. Sections 222 to 232 of the Income Tax Act, 1961 and schedules II and III, thereto and the Income Tax (Certificate Proceedings) Rules, 1962, together constitute a self contained code prescribing the various modes for the recovery and arrears of tax under the Act. These provisions are also applicable to Wealth Tax Act.
2. The Tax Practitioners have the duty to advice the assessees to pay the tax what is rightfully due to Government, neither less nor more. The law of recovery is based on Civil Procedure Code, 1908. In Krishna Prasad Singh vs. TRO (1996) 221 ITR 720 (Cal.), it has been held that the provisions of Schedule II to the Income tax Act are analogous and similar to those in Civil procedure Code and therefore, the decisions relating to the CPC would be applicable for interpreting similar provisions in Schedule II to the Act.

END_OF_DOCUMENT_TOKEN_TO_BE_REPLACED

The DTC 2010 has had its fair share of criticism. Before DTC 2010 is steam-rolled into Law, its detractors have a last chance to voice their grievances before a Select Committee which promises to look into all issues objectively. The author urges all tax payers to make the most of this opportunity and starts off by listing his litany of woes

1. Direct Taxes Code Bill 2010 which was introduced in the Parliament on 30th August 2010, has been referred to Parliament “Standing Committee on Finance” headed by Shri Yashwant Sinha Former Finance Minister. The code will come into force on the 1st day of April 2012. As per the advertisement published in DNA DT 13-11-2010, the Government of India has invited the suggestions from various individuals/experts /institutions etc and the suggestions are required to be forwarded to the committee within 20 days of the publication of the advertisement. My past experience with the parliament standing committee is very much encouraging because they consider the suggestions objectively without any political bias hence, I am of the considered opinion that the professionals and organizations must put forward their views without any fear or favour taking into consideration, the interest of nation and honest tax payers of our country. I have made an attempt to discuss certain conceptual issues which may be considered and if found fit may be forwarded to the committee along with other important issues which you may feel requires consideration.

END_OF_DOCUMENT_TOKEN_TO_BE_REPLACED

Lawyers And CAs Are the New Warriors!

The author says that modern day battles are fought in the court room and that lawyers and CAs are the new warriors. He lauds the efforts of the National Tax Moot Court Competition which hones the skills of budding professionals but says that the time has come to debate whether the desired objects are being achieved or there is some other way to benefit young professionals

16th January, 2004 was a memorable day in the history of the Federation. On this auspicious day the then Prime Minister of India, Hon’ble Atal Bihari Vajpayee, released a commemorative postage stamp in Mumbai which was dedicated to Shri N. A. Palkhivala. In his speech, Prime Minister stated as under

“In those days, the battle for democracy was fought by many people in many different ways. Many of us in politics under the leadership of Jayaprakash Narayanan fought it in prisons. But I have no doubt that one of the finest battles was fought in the court room and that fighter was Nani Palkhivala”.

END_OF_DOCUMENT_TOKEN_TO_BE_REPLACED

admin Posted in legislation — No Comments ↓ 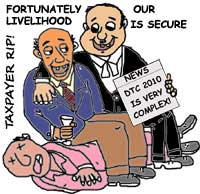 The Author rues that the Direct Tax Code 2010 is a golden opportunity gone waste. What could have been a revolutionary exercise in tax reforms has been reduced to a pedestrian re-numbering of sections, agonizes the author. But, eternal optimist that he is, all is not lost, says the author and sets out an 11-point agenda to salvage the DTC 2010. Is the draftsman listening?

The discussion paper on Direct Taxes Code Chapter 1, reads as under “The Code is not an attempt to amend the Income-tax Act, 1961, nor is an attempt to “Improve” upon the present Act. In drafting the Code, The Central Board of Direct Taxes (The Board) has to the extent possible started on a clean drafting slate. Some assumptions which have held the ground for many years have been discarded. Principles that have gained international acceptance have been adopted. The best practices in the world have been studied and incorporated. The tax policies that would promote growth with equity have been reflected in the new provisions. Hence while reading the Code it would be advisable to do so without any preconceived notions, and as far as possible without comparing the provisions with the corresponding provisions of the Income-tax Act, 1961”. I have made an attempt to discuss certain conceptual issues which may be considered as we are proposing to bring new Income Tax to our country which will be in statute for at least for another 50 years.

END_OF_DOCUMENT_TOKEN_TO_BE_REPLACED

Beware The ‘Force Of Attraction’

The author argues that non-residents dread the ‘Force of Attraction’ rule in Double Taxation Avoidance Agreements because it permits the taxation of income arising outside the Contracting State. The ‘Force of Attraction’ rule can also create an anomalous situation where an assessee may be better off under the domestic law than under the tax-treaty law, says the author

The recent judgement of the Tribunal in ITO vs. Linklaters LLP has put the spotlight on the dreaded “Force of Attraction” principle.

END_OF_DOCUMENT_TOKEN_TO_BE_REPLACED

The Finance Minister publicly expressed his anguish at the mounting number of frivolous cases filed by the department which are choking the Courts. The author, a public-spirited citizen ever eager to help the FM in such matters, puts on his thinking cap and formulates a 12-point agenda to cure the malaise. If implemented in real earnest, the mindless filing of departmental appeals will cease, assures the author. Is the FM listening?

The Hon’ble Finance Minister while addressing the Chief Commissioner’s Conference asked the CBDT to come out with a comprehensive proposal to address the issue of unwanted litigation with the tax payers. Federation has suggested proposals to reduce the tax litigation from time to time. “Kar Vivad Samadhan Scheme, 1998” (1998) 233 ITR 36 (St.), which was successfully implemented by the Government was the suggestion of the Federation. Hon’ble Justice Mr. V. C. Daga, Judge, Bombay High Court in Commissioner of Central Excise vs. Techno Economic Services Pvt. Ltd. (2010) 255 E.L.T. 526 (Bom.) has taken judicial notice and directed the Chairman, Central Board of Excise and Revenue, Ministry of Finance to frame guide lines similar to Income tax matters. The Hon’ble Justice observed that “Let the Court to decide, attitude needs to be given go bye”. The Comptroller & Auditor General of India (CAG), in its recent report has revealed that a whopping sum of Rs 2.2 lakh crores has got locked up in appeals at various levels. The report stated that “absence of centralized database on appeals, non production of records during audit was a major constraint and concern”. Even the Federation in spite of making a sincere attempt could not succeed to get the number of tax appeals, references and Writ petitions pending before the various High courts.

END_OF_DOCUMENT_TOKEN_TO_BE_REPLACED

All Hail The Temple Of Justice!!

The Author fondly refers to the Tribunal as ‘Mother’ and urges that by the time its Platinum Jubilee is celebrated, it must be regarded as the finest legal Institution in the Country. It is possible, he says, if the Bar and the Bench play their part in preserving the honour, dignity and purity of the Tribunal!

END_OF_DOCUMENT_TOKEN_TO_BE_REPLACED

Profits, Yes, but whither duty to Country? 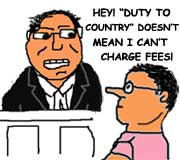 The author is full of praise at the clarion call of the new Chief Justice of India that one must put duty to the Country before duty to the self. Inspired, he has formulated a 10-point agenda and implores us to follow it in the right spirit to bring some nobility into the noble profession

At the Inaugural function of the 12th National Convention of All India Federation of Tax Practitioners held at Mumbai on 24th December, 2002, the Hon’ble Mr. Justice S. H. Kapadia, then Judge of Bombay High Court addressed on the theme of “Tax Evolution to Economic Revolution”. (AIFTP Journal – January, 2003 P. 12). The delegates at the seminar and I, as a National President elect of the Federation had the privilege and opportunity of listening to the Hon’ble Justice on the economic subject and also on the issues relating to tax reforms. For the benefit of tax professionals, the Hon’ble Justice had made a noble suggestion which is as under:-

END_OF_DOCUMENT_TOKEN_TO_BE_REPLACED 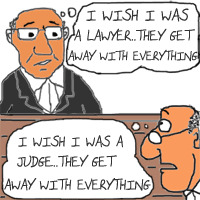 The Law Commission of India in its Report No. 232 dt. 22-8-2009 has recommended that the retirement age of all heads of Tribunal may be raised to 70 Years and of members to 65, for the reason that there is no uniformity of retirement age for the heads of various Tribunals. In almost all the Tribunals the members and the heads of the Tribunal discharge similar judicial functions, hence, there is no reason for fixing the retirement age for the heads of the institution at 70 years and those of the members 65. The distinction if any, is invidious.
END_OF_DOCUMENT_TOKEN_TO_BE_REPLACED 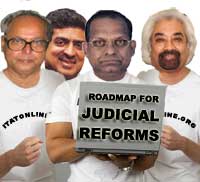