Home › judiciary › Does Anybody In The Govt. Care For The Welfare Of The Income-tax Tribunal? 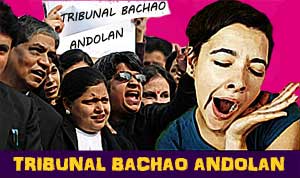 By not appointing the President, Sr. Vice President and Vice Presidents, the Govt is sending a wrong message that we have no members who deserve to be appointed to lead the institution. If that is so, how the citizens will have confidence in the Institution?

The Income-tax Appellate Tribunal is a judicial body, has to deal with cases of Revenue and Assessee. An acting President may not be able to take many bold decisions for better administration of justice. It is also to be noted that if this trend continues many competent and senior professionals who may be having the desire to serve the nation by joining the Bench may not come forward and make an application to be appointed as members of the Tribunal, because there is neither elevation to High Court, nor will they be promoted as Vice-President or President nor they will be entitled to practice before the Income-tax Appellate Tribunal.

At the inaugural function of the ITAT Members’ conference at Mumbai on 4th November, 2006, the then Hon’ble Law Minster Mr. H.R. Bharadwaj stated that he is in favour of raising the retirement age of members of the ITAT from present age of 62 to 65, but till date there is no move in this direction. The Bill for increasing the age limit of High Court judges from 62 to 65 which was published in the Official Gazette on 25th August 2010 has been approved by the Parliament standing Committee headed by Smt. Jayanti Natarajan, Member of Raja Sabha, in the year 2010, however till date Bill has not became an Act.

If the Govt does not take any initiative to better the administration of justice by Income- tax Appellate Tribunal, the future of the Institution will be at stake and the Tribunal may not be able to retain its glory as one of the finest institution of our Country

If the Government does not take any initiative to better the administration of justice by Income- tax Appellate Tribunal, the future of the Institution will be at stake and the Tribunal may not be able to retain its glory as one of the finest institution of our Country. Due to certain unfortunate incident which happened few years back, one cannot brand the entire institution as bad. We can say with full pride that we do have number of members who are men of integrity and knowledge. It is the duty and responsibility of the Bar to protect the members who are men of integrity so that they can discharge their duty without any fear or favour.

Members of the ITAT also have a greater responsibility to preserve the honour and dignity of the institution so that the Income-tax Appellate Tribunal retains its glory as one of the finest institution of our country and we feel proud that we are part of it. It is our sincere desire to preserve the honour, dignity and to get unpolluted justice from the final fact finding body which is the mother Tribunal. There are good number of professionals who are men of integrity, knowledge and excellent reputation and who appear before this august institution and higher forums regularly and few of them have been appearing before this institution for more than 50 years. They have witnessed the past glory of this institution, they are well conversant with the present atmosphere prevailing in the functioning of this institution, they have taken lead in preserving the independence of this institution. We therefore suggest as under;

(1) that in the interest of the institution, the posting of the President needs to be confirmed at the earliest,

(2) Post of the Senior Vice-President, and Vice –Presidents may be filled up the earliest,

(5) Institutionalise the process of elevation to High Court from the ITAT, so that many deserving members of the ITAT can be elevated;

(6) Speedy judicial enquiry and final report on Kolkata episode may be published at the earliest;

(7) Concept of E. Tribunal which is functioning at Mumbai may be extended to smaller places, and this innovative concept may be tried to have E. Benches of Supreme Court linked with all the High Courts;

(8) Hon’ble Law Minster may have to devote some time to interact with Bar and Bench for better administration of Justice.

We hope the Hon’ble law minister will spare some time to interact with the Bar and Bench on the above issues and other important issues for better administration of Justice and the Income tax Appellate Tribunal Bar Associations will play a proactive role to maintain and preserve the Mother Tribunal as one of the finest institution of our country.

Reproduced with permission from the AIFTP Journal, April 2013

9 comments on “Does Anybody In The Govt. Care For The Welfare Of The Income-tax Tribunal?”