Home › judiciary › Crores Of Revenue Locked Up In Litigation But No Money For ITAT Working?

Crores Of Revenue Locked Up In Litigation But No Money For ITAT Working? 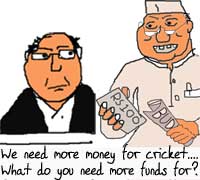 The author bemoans the myopic attitude of the Government that even though hundreds of crores of revenue is locked up in litigation pending before the Tribunal, a few crores is not being spared for the day-to-day effective functioning of the Tribunal. Even strictures by the High Court in similar matters is not having any effect on the Government’s attitude rues the author. He pleads again with the powers that be to wake up and smell the coffee before it is too late to save the Tribunal

The Income tax–Appellate Tribunal (ITAT) which was established in the year 1941 is considered as mother Tribunal of all other tribunals. Regrettably, it has been ignored by the Government due to the frequent change at the helm of the Law Ministry in the last four years. Hence, the Ministry could not devote the deserved time on issues pertaining to the better administration of the ITAT. The ITAT, which is the final fact finding authority, requires urgent attention and support of the Government for its continued excellence in administering justice. I have made an attempt to highlight some of the important issues which require immediate attention.

The ITAT has Benches in more than 26 centres which require a budget of at least Rs. 10 crores every year. However, this year, the sanctioned amount was only half of it. If sufficient funds are not provided within a reasonable time, the entire ITAT administration may soon collapse. At many places, the Tax Bars have made petitions for regular benches to be set up. However, lack of funds is a major constraint in this, which in turn, has affected the speedy disposal of appeals. It is desired that the Honourable Law Minster visit the headquarters at Mumbai to discuss these issues with all stakeholders and take remedial measure. Only when he himself inspects the conditions of the Tribunal, he may be able to appreciate the deteriorating conditions.

5. Increase in age limit of members

The then Honourable Law Minster, Mr H.R.Bhardwaj, while addressing the members conference at Mumbai on 4th November, 2006 stated that the Government will increase the age limit of all members from the present 62 to 65.

A similar representation has also been made by the AIFTP for High Court judges. Very recently, in a PIL filed by the Sales Tax Tribunal Bar Association, the Honourable Bombay High Court directed that Government should consider the increasing the age limit of all the members. It is in the interest of this institution if the age limit of members is increased from the present 62 to 65. I am of the opinion that the knowledge and experience of a judge/ member is an intangible asset for the nation and it should be used for justice delivery efficaciously.

The unfortunate episode at the ITAT Kolkata bench in the year 2008 had damaged the reputation of this Institution which was built over seven decades. The ITAT Bar Association, in the month of June 2008 passed a resolution and requested then Law Ministry for a speedy and independent inquiry. However, no finality has been reached till date. It is desired that the entire enquiry be completed within a time bound period and its result made public. This will only help the Institution to regain its reputation and the taxpayers’ confidence and respect.

Concept of the e-Court of the ITAT may be tried with other smaller places too. It is desired that the Honourable Law Minister visit the ITAT Mumbai and watch the proceedings of the e-Court. This concept of e-Court can even be extended for setting up e-Benches of the Supreme Court linking with various High Courts.

8. Institutionalisation of the process of elevation of Members to the High Court

Till now, very few members of the ITAT have been elevated to the High Courts. This process should be institutionalised which will help in bringing in transparency. It is desired that the all the High Courts must have a permanent tax bench and one of the judicial members of unimpeachable integrity could be elevated from the ITAT. Members of the ITAT due to their specialised knowledge and experience in tax and business accounts would be able to understand and decide the issues better. This will also attract many young bright lawyers to join the Bench.

9. Liberalisation of process of appointment of staff

The process of appointing staff at ground level may be given to the President and collegiums. They can select the local people from within area of bench which may help the institution.

10.Use of technology for better administration of justice

It may be noted that 65% of the appeals before the ITAT are by the Department. To start with, the process of e-filing can be started with the departmental appeals which may later be made optional for the assessees as well. Eventually, this will help in achieving a paperless Tribunal which will add to its efficiency and speed.

In spite of the best efforts made by the ITAT Bar Association, Mumbai from time to time, our Honourable Law Ministers could not spare time to discuss various issues relating to the ITAT. We hope that the Honourble Law Minister takes some positive steps in the interest of this Institution and spends some time with the representatives of the ITAT Bar Association, Mumbai for discussing these issues.

Reproduced with permission from the AIFTP Journal, October 2013

5 comments on “Crores Of Revenue Locked Up In Litigation But No Money For ITAT Working?”