Home › judiciary › Dear Judges, Thanks For The Strictures But What About Some Follow-Up Action?

Dear Judges, Thanks For The Strictures But What About Some Follow-Up Action? 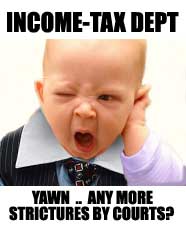 The author, an eminent senior advocate, expresses gratitude at the proactive role played by Courts in seeking to redress the inefficiencies of the department. However, while the strictures do shake the department out of its’ reverie for some time, the effect does not last long. The author suggests that a monitoring mechanism should be set up and the top brass of the department hauled up for non-compliance of the directives. The author has also identified the problem areas and suggested simple and cost-effective solutions to prevent the department from being on the wrong side of the law

As on 15-2-2014, the pendency of appeals and references before the Bombay High Court was more than 9,700, which includes 1,850 old references, 4,700 appeals admitted and pending for final hearing and 3,150 pending for admission. The Income-tax Appellate Tribunal Bar Association has made a representation to the Hon’ble Chief Justice of the Bombay High Court to constitute at least two tax Benches. We wish to express our gratitude to the Hon’ble Chief Justice for being kind enough to accept the request and constituted three tax Benches.

It is however very unfortunate that when the old matters were kept for final hearing on 4th March, 2014, counsels (for the assessee and for the Department) were not ready and the matters were required to be adjourned. The Hon’ble judges have passed an order in the case of Thermax Babcoock & Wilcox Ltd. v. CIT (Bom.)(HC) www.itatonline.org observing as follows:

“We have noted that the final hearing Board consists of all appeals of 2002. First two matters have been adjourned by us only because the department or advocate for the appellant sought accommodation. They did not either havepapers or were not ready with the case. Such state of affairs will not be tolerated hereafter. In the event, the counsel engaged by the department is absent without a justifiable or reasonable cause we will invariably impose costs and to be paid by the counsel personally. Equally, we would proceed in his absence. In the event, the appellant or his advocate is absent, we will proceed to dismiss the appeal for non-prosecution. Thereafter, no application for restoration of the appeal will be considered unless the appellant makes out sufficient cause for absence.”

In CIT v. American Bureau of Shipping ITA No. 346 of 1988 dt. 25-7-2005, the Bombay High Court dismissed the department’s reference application as the department had not served the paper book to the respondent even after 17 years of filing of reference. (AIFTP Journal –August-2005 P. 10) Number of matters referred to Bombay High Court under section 256(2) has been dismissed as the department has taken any initiate to comply the procedural requirements. Who is accountable?

In early days, with one advocate on record and many lawyers on the panel of the tax department, there was better coordination and efficiency in handling litigation issues. However, under the present system, each Commissioner of Income-tax has a different lawyer and vakalatnama is being filed by different lawyers. It has also been observed that the concerned lawyers may not even be on the panel when the matter comes up for final hearing after many years which results in avoidable delay in disposing off the cases. Every such adjournment results in precious time of the Court being lost and tax payers’ money wasted on unproductive purposes.

We are of the opinion that this situation can be improved if the entire work of filing of vakalatnama is outsourced to a law firm. If the tax administration in Mumbai does not take any remedial measures soon,they may lose good matters due to inadvertent procedural lapses. Also, the fees for filing vakalatnama and appearing on behalf of the Department deserves to be increased. The Department accounts for more than 60% of all the tax appeals filed in the Bombay High Court.

“(a) We cannot avoid observing that of late the quality of orders that are come out from the Tribunal in exercise of its appellate power under section 256 of the Act are found to be wanting and in many respect and many a times the orders are very prefecture, even non-speaking orders and has no correlation to the fact situation that prevails in a given case.

(b) We also notice that the members of the Tribunal have developed an unhealthy habit of quoting totally unrelated judgments which are not applicable at all to the facts of the case, to pass orders not otherwise sustainable on facts or in law. We strongly deprecate such a tendency on the part of the members of the Tribunal, which is quite naturally a professional Tribunal comprised of expert members, one member from the Revenue side and another member from the accounting side, with considerable experience in their respective fields and to whom we can attribute expertise. We feel sorry that the confidence posed by the Legislature is not being justified by passing orders that are outcome from the Tribunal now-a-days;

(c) It is high time the method of recruitment to the Tribunal is also reviewed by the authority concerned and at least henceforth it is ensured that the members of some standing, integrity and competence are put in place as members of the Tribunal and not all and sundry;

(d) The Legislature, particularly the Union Parliament may also take note of such tendency on the part of the Tribunal and ensure for suitable legislative measure so that the purpose and the object with which such Tribunals are constituted really sub-serve not only the interest of aggrieved assessee but also to ensure that the Revenue’s interest is not simply scarified or jeopardized by errant members;

This order was passed on September 13, 2010. It would be interesting to find out whether any discussion was held in the Ministry of Law or in the Tribunal to improve the overall functioning of the Tribunal. This issue also assumes importance in light of the interview process for appointment of 45 new Members of the Tribunal being underway.

It is also worth appreciating that there are a number of Members of the Tribunals who draft their orders very well and deserves to be appreciated for the quality of orders. Professional organisations can thus play a proactive role in this regard.

While the Rajasthan High Court’s views in the above case are not off the mark, it is also worth appreciating that there are a number of Members of the Tribunals who draft their orders very well. It is also apropos to quote Shri H. R. Gokhale, Union Law Minister [Lok Sabha debates (18th Session) On the Constitution (42nd Amendment) Bill]: on 1st November, 1976

Delhi High Court in A. T. Kerney India Pvt. Ltd. v. ITO (Order dated 8-4-2014 www.itatonline.org) has passed strictures against the Assessing Officer for recovering tax without following the due process of law. The Court also forwarded the copy of the judgment to the CBDT for taking appropriate measures. Time and again, we find a number of orders being sent by the Courts and Tribunals to authorities concerned for taking appropriate measures.

Unfortunately, there is no mechanism under which one can find out whether any remedial measures are taken by the authorities concerned when Courts pass such strictures. Possibly, by the use of Right of Information Act one can find out whether any such remedial action is taken. A PIL can be filed by the professional organisations in respective High Courts for the enforcement of such orders.

The ITAT Bar Associations’ Co-ordination Committee of the All India Federation of tax Practioners are proposing to make suggestions to the Ministry of Law and Justice for better administration of the Tribunal which is the final fact finding authority. Issues to be discussed in the proposed meeting are published in the journal. Readers may send in their views and suggestions. Your valuable suggestions may help to bring better tax laws and better administration of justice.

Reproduced with permission from the AIFTP Journal, April 2014

22 comments on “Dear Judges, Thanks For The Strictures But What About Some Follow-Up Action?”