The CBDT is known to be a law unto itself. No amount of strictures from the Courts has any impact on it. Now, it has come into the bad books of the Election Commission with the latter expressing “deep sense of anguish” about the “casual and trivial” approach of the CBDT. The EC has expressed its “extreme displeasure” at the “Stark violation of established protocol“.

Text of letter issued by the Election Commission of India

The Election Commission of India expresses its deep sense of anguish about the casual and trivial manner in which the advisory to be absolutely neutral, impartial and non, discriminatory has been responded to by Department of Revenue, Ministry of Finance vide letter F. No. A.50050/15/2019-Ad. I dated 08.04.19.

In pare 3 of aforementioned letter, instead of detailing the modalities of implementing the advisory, Department insolently chose to issue a counter advisory.

The Commission has noted with extreme displeasure, the tone and tenor used for addressing a Constitutional Authority in stark violation of the established Protocol.

Therefore, the Commission reprimands the Department of Revenue for making unwarranted remarks and expects that the directions issued by the Commission m the said advisory are followed in letter as well as in spirit.

The provocation for the outburst was the counter advisory from the Department of Revenue which said:

“Since it is the responsibility of the Election Commission as also of the revenue agencies to check and eventually eliminate the use of unaccounted money in election, we would also like to urge EC to advise its field officers involved in the enforcement of the model code of conduct to take immediate enforcement action at their end under the election and other appropriate laws, if they come across any specific information about use of illicit money in electoral process …

EC’s field officers may also, if they deem fit, pass on the information confidentially’ to I-T department for ‘taking further necessary action’.”

Election Commission expresses extreme displeasure against Department of Revenue on its conduct, comes down hard on the department issuing a counter advisory#Elections2019 pic.twitter.com/nbjGmEeEjB 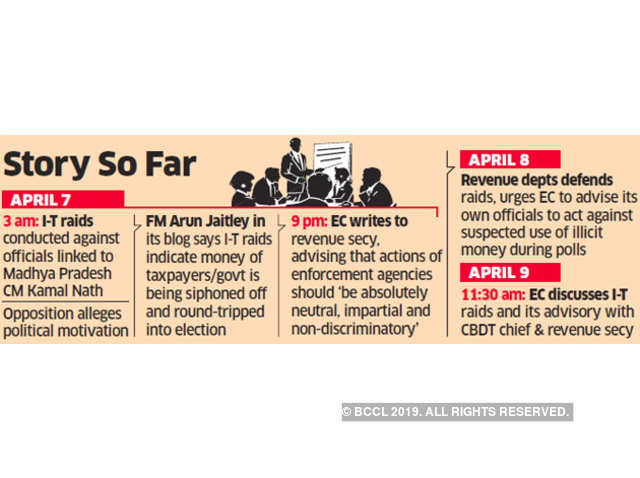 The recent Election Commission and IT raids have shown that it is taxpayers/ Government’s money, which through PWD and other Departments of the Government, is being siphoned out and round-tripping into politics.

Plz imagine if the amount of Rupees has recovered from the personal secretary of CM, Kamal Nath, than how much money has been looted by the CM & his ministers in only 3 months tenure. Esiliye Rahul Gandhi is hungry for getting power in the centre…. shame on you Pappu led congr pic.twitter.com/27w2SoveIa

IT found 280+ cr in raids on Kamalnath. That's nothing.

Deepak Puri, founder of Moser Baer is Jijaji of Kamalnath.

He even got a Padam Shri.

Dear @RahulGandhi
Why are you quiet on income tax raids? Who is the politician from Delhi Tughlaq Road? Why is Congress worried? https://t.co/6G8K6XB8vZ

. @Narendramodi ji trying to take credit of Biggest Surgical Strike against Corruption in Madhya Pradesh but it was Nehru who founded Income Tax Department. Only Nehru ji should get credit for exposing Kamal nath Curruption