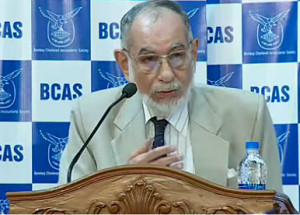 Eminent Jurist Shri. S. E. Dastur addressed a distinguished audience of professionals and taxpayers on Friday, 4th March 2016, on the implications of the Finance Bill 2016. The function was organised by the Bombay Chartered Accountants’ Society (BCAS).

This was Mr. Dastur’s 28th talk on the Finance Bill, which is probably a World record in itself.

With his usual eloquence and clarity of expression, Mr. Dastur enthralled the audience as he unravelled nuances of the Finance Bill 2016.

The eminent jurist was appreciative in principle of the proposal to tax charitable trusts which turn non-charitable (Chapter XII-EB, Sections 115TD to 115TF). However, he expressed concern that the requirement that the trusts have to pay the tax within 14 days of the cancellation of registration u/s 12AA is impractical and would lead to great hardship. Mr. Dastur pointed out that it is common experience that the department revokes the registration of charitable trusts on flimsy and frivolous reasons. There are scores of judgements where the orders of cancellation of registration have been struck down. In such circumstances, requiring the trust to pay the tax and interest pending the appeal is unfair, he said.

Mr. Dastur was also appreciative in principle of the move by the department to usher in paper-less and electronic communication with taxpayers. However, he opined that a one-to-one interaction with the AO is sometimes desirable to “disabuse” the notions of the AO regarding the taxability or non-deductibility of a particular item. Mr. Dastur also pointed out that there are several taxpayers who still don’t have an email account or access to the internet. He suggested that the electronic mode of communications should be made optional and not mandatory.

Mr. Dastur made the same point in the context of section 47(xiiib) which seeks to exempt the conversion of companies to LLP from tax on capital gains if certain conditions are fulfilled. Mr. Dastur opined that the law is well settled by the judgement of the Bombay High Court in CIT vs. Texspin Engineering and Manufacturing Works (2003) 263 ITR 345 (Bom) that such conversions (under Part IX of the Companies Act) are a mere change of the “legal avatar” and do not result in a “transfer” which can attract capital gains. However, by conferring an exemption and making it subject to fulfilment of conditions, the implication is that the non-fulfilment of the conditions will result in a tax liability even though there is none on first principles, Mr. Dastur said.

Mr. Dastur was also critical of the proposal to substitute the provisions of penalty in section 271 with the new section 270A and the introduction of new concepts of “underreporting of income” and “misreporting of income”. The learned Jurist explained that the law on levy of penalty is now well settled with scores of judgements of the High Courts and Supreme Court. It is not desirable to torpedo the existing law and introduce brand new provisions. This would create uncertainty in the law and lead to unnecessary litigation, he opined.

Of course, lawyers and Chartered Accountants will welcome the approach of Mr. Arun Jaitley, himself a leading lawyer, of creating fresh avenues for controversies and litigation, Mr. Dastur said tongue-in-cheek and in a jocular tone.

Mr. Dastur made several other important points in the context of the amendments to sections 28(va), 50C, 143(1), etc.