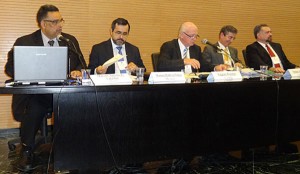 The Brazilian Institute of Tax Law at the University of Sao Paulo, Brazil, arranged an event on 30th September 2013 which was attended by luminaries from the World of international taxation. The luminaries, who are also Judges in their respective Countries, made incisive presentations on controversial topics and provided authoritative answers to several issues. The participants were:

(i) Hon’ble Pramod Kumar, Accountant Member, ITAT: The learned Judge has explained the entire law on the extent to which Article 3(2) of the Model Convention can be pressed into service while interpreting a tax treaty. He has relied on a number of Indian and International judgements in support of his propositions;

(iii) Hon’ble Manuel Hallivis Pelayo, Judge, Mexico: The learned Judge has explained the entire law on Interpretation of International Tax Treaties with particular reference to the Vienna Convention on the Law of Treaties;

(iv) Hon’ble Philippe Martin, Judge, Conseil d’Etat (France): The learned Judge has examined the delicate relationship between tax treaties and the domestic law and which one is to prevail in the event of a conflict between them and

The presentations will provide great insight into the law and practices prevailing across the Globe and will prove invaluable to all professionals practicing international taxation.

2 comments on “International Taxation: Presentation By Judges On Controversial Topics”