editor Posted in All Information, Others — 9 Comments ↓ 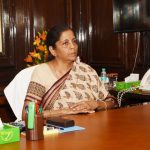 Smt. Nirmala Sitharaman, the Hon’ble Finance Minister, has released statistics which prove that the Income-tax department is indeed a dreaded den of corruption. In the year 2018 itself, 1441 complaints were received by the CBDT from hapless taxpayers against the officials of the Department. The Finance Minister has solemnly assured Parliament that the Government is taking strict action against such officials. She has also listed out the several steps which have been taken by the Government to ensure corruption free tax administration in the Country

The complainant against the officers under the Department of Revenue received through CVC, individuals and other sources are dealt as per the existing guidelines of CVC and DOPT.

(i) The details of complaints received in Central Board of Direct Taxes (CBDT) are as under:-

(ii) The details of prosecution launched by Central Board of Indirect Taxes & Custom (CBIC) under Prevention of Corruption Act, 1988 are as under:-

The details of prosecution cases under Prevention of Corruption Act, 1988 in Public Sector Banks are as under:-

Departmental Proceedings have been initiated by Directorate of Enforcement(ED) in 6 cases.

There are 15 cases pending in Department of Economic Affairs against the officers of Securities and Exchange Board of India(SEBI), Security Printing and Minting Corporation of India Limited(SPMCIL) under various charges.

This is an ongoing process. Communication is received from Central Vigilance Commission (CVC) from time to time recommending strict action against such officers. However, there are no such cases in which no action have been taken.

Steps to ensure corruption free tax administration in the country

The following steps, inter-alia have been taken by the Government to ensure corruption free tax administration in the country:

(i) Online system for internal whistle-blower has been put in place to get the vital feedback and complaints through department’s portal.

(ii) Reduction in human interface with tax payer with the introduction of higher digitization such as e-filing, e- assessment, e-appeal, e-nivaran.

(iii) Guidelines have been issued for ensuring that the assessing officers do not increase the scope of investigation in Limited Scrutiny cases without following due procedure.

(iv) Guidelines have been issued laying down specific responsibilities during conduct of surveys and in post survey operations to obviate the possibilities of any wrongdoing.

(v) All field formations have been asked to install CCTV cameras in corridors and public spaces.

(vi) Checklists and Standard Operating Procedures have been laid down for Inquiry Officers to minimize instances of defective Inquiry Reports.

(vii) System studies are being conducted by Zonal ADsG to identify potential areas of corruption and suggest systemic improvements.

This was stated by Smt. Nirmala Sitharaman, Union Minister of Finance & Corporate Affairs in a written reply to a question in Lok Sabha today.