Shri Justice Altamas Kabir will be the new Chief Justice of India. He will assume the new charge on 29th of this month. 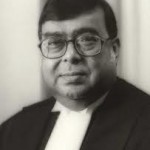 Justice Kabir was responsible for the computerization of the Calcutta High Court and the City Civil Court and other Courts in Kolkatta. He was appointed as Executive Chairman of National Legal Services Authority on January 14, 2010.