Home › All Information › Elevation Of Tax Judge As Chief Justice Overlooked by Govt?

Elevation Of Tax Judge As Chief Justice Overlooked by Govt? 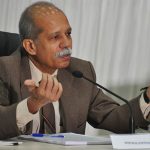 It was reported earlier that the Supreme Court Collegium has recommended the appointment of Hon’ble Mr. Justice A.A Kureshi as Chief Justice of the Madhya Pradesh High Court.

“Having regard to all relevant factors, the Collegium is of the considered view that Mr. Justice A.A Kureshi is suitable in all respects for being appointed as Chief Justice of the Madhya Pradesh High Court,” the Collegium had stated in the resolution dated 10th May 2019.

However, according to a press report in the Hindu, the Government has acted in defiance of this resolution and appointed Justice Ravi Shanker Jha as the Acting Chief Justice of the Madhya Pradesh High Court.

The report also points out that this is not the first time that Justice Kureshi’s appointment has been embroiled in controversy.

Instead, he was faced with an abrupt transfer to the Bombay High Court and Justice A.S. Dave, the senior most judge after Justice Kureshi, was appointed the Acting Chief Justice — all on the same day.

However, the government had then quickly changed tack to issue a second notification appointing Justice Kureshi as Acting Chief Justice of the Gujarat High Court until he took over office in the Bombay High Court.

It is stated that the controversy had raised questions about the way Justice Kureshi was dealt with by the government, and whether this had anything to do with adverse orders passed by him against the ruling dispensation.

“I will not be a post office, Ravi Shankar Prasad ‘warns’ collegium”
Click here to read the press report in The Hindu
See also: How To Be A Good Advocate & Fulfill Expectations Of Courts & Clients: Tax Judge Justice Akil Kureshi Explains