The Hindustan Times has carried the following press report today (23.01.2012) 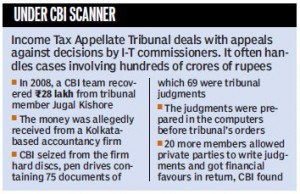 Chief Justice of India SH Kapadia has asked the government to take “appropriate action” against at least 20 members of the country’s top income tax tribunal who are on the CBI’s radar for having allegedly ‘outsourced’ writing of judgments to private parties.

Justice Kapadia is understood to have conveyed his displeasure to law minister Salman Khurshid over inaction on the issue since 2008, HT has learnt. Khurshid met the CJI earlier this month.

The meeting was followed up by justice Kapadia writing to Khurshid on January 5, reminding the minister about his communication with the ministry in February last year.

Following justice Kapadia’s letter, Khurshid has directed the legal affairs department “to expedite the matter”.
The CBI has been seeking sanction from the ministry since 2008 to register a preliminary inquiry against at least 20 members of the Income Tax Appellate Tribunal posted in different parts of the country.

The agency alleged that these members had outsourced writing of judgments to private parties to favour them.
Khurshid told the Rajya Sabha on January 12, “The matter is under consideration in consultation with the Central Vigilance Commission.”

The law ministry, which has administrative control over the tribunal, recently granted sanction to the CBI to file a chargesheet in a Kolkata court against suspended tribunal member Jugal Kishore and five others. But it hasn’t responded to the agency’s request for a probe against other members pending for more than three years.

Following a tip-off, the CBI in May 2008 recovered R28 lakh from Kishore’s Kolkata residence. A chartered accountancy firm allegedly paid the amount to him.

Subsequently, the CBI seized computers from the firm and scrutiny of discs led to retrieval of 75 documents that showed striking similarities with 69 orders passed by the tribunal’s benches in Kolkata, Mumbai, Chennai, Hyderabad, Bhubaneswar and Guwahati.