editor Posted in All Information, Others — 24 Comments ↓

M Krishnaswamy, an officer of the 1988 batch of Indian Revenue Service (IRS), who is of the rank of Commissioner of Income-tax and is presently posted as Director (Investigation), Settlement Commission, Delhi, is the latest to fall foul of the CBI’s crusade against corrupt officials.

The CBI has issued a grim press release which reads as follows:

“The Central Bureau of Investigation has registered a case u/s.109 of IPC r/w 13 (2) r/w 13 (1)(e) of PC Act 1988 against then Commissioner of Income Tax (IRS – 88 Batch), presently posted as Director (Investigation), Settlement Commission, Chennai and 8 others including his family members & certain benami property holders, on the allegations that the accused had amassed disproportionate assets to the tune of Rs.6.1 crores (approx). The other accused had allegedly abetted him in commission of said offence. It was further alleged that the public servant had acquired huge assets in the name of his immediate family members & benami holders at Chennai and various other places in Tamil Nadu including at his native village near Palani (Tamil Nadu).

Searches have been conducted at 14 places including residential & official premises in Chennai, Palani and other places in Tamil Nadu, which led to recovery of documents relating to property worth several crores of rupees (approx); locker details; investments in shares; investments in a private firm and also investments in another company. 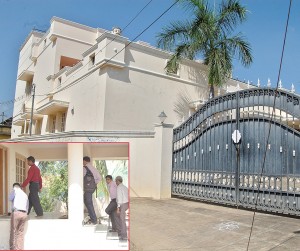 The Indian Express carried a picture of Krishnaswamy’s residence in Palani which appears to be palatial by any standards. It also reported that Krishnaswamy had acquired huge assets in the name of benami holders at Chennai and various other places in Tamil Nadu. The CBI raid began at 10.30 am and went on till evening, it said.

It is worth recalling that M Krishnaswamy is the latest in a long list of elite IRS officers who have been booked for corruption. In Despite “Anti-Corruption Pledge”, Income-Tax Dept Remains Den Of Corruption, it is pointed out that the CBI has carried out similar raids on Sailendra Mamidi and Anil Goel, both of whom are Chief Commissioners of Income-tax, and Santosh Jangre, the Joint Commissioner of Income-tax, Mumbai.

Unfortunately, there is no update from the CBI on what is the progress in these cases or the several that have preceded them.