editor Posted in All Information, ITAT related, Others, Pendency — 4 Comments ↓

The CBDT has sent the clear signal in the Central Action Plan 2019-20 that it will no longer tolerate the lethargy of CsIT(A) in the matter of disposal of appeals. It has pointed out that huge tax demands are locked up in these appeals. It has stipulated that 100% of appeals involving demands of Rs. 50 crore should be disposed off by the CsIT(A) before the specified time limit

No more “incentives” to CsIT(A) for doing their job

The CBDT has been trying all the tricks of the trade to persuade recalcitrant CsIT(A) to do their job.

However, these have had limited impact so far.

In July 2018, the CBDT adopted the “stick” approach and threatened CsIT(A) that they would be subjected to “disciplinary action” if they did not meet their targets.

When this failed, the CBDT switched to the “carrot” approach and offered “incentives” to CsIT(A).

However, this proposal backfired badly because taxpayers rightly feared that this would send CsIT(A) on a rampage and they would enhance assessments and levy penalty indiscriminately in order top earn the so-called “incentives“.

Well known tax experts like Dr. Y. P. Trivedi, Arati Vissanji and Dr. K. Shivaram condemned the proposal and pointed out that this was in gross violation of several judgements of the Supreme Court (see Top Tax Professionals Slam CBDT For “Incentive” To CsIT(A) To “Enhance Assessments”).

Ultimately, the Bombay High Court had to rush in to save hapless taxpayers.

It struck down the “incentives policy” by pointing out that it transgresses the exercise of quasi-judicial powers & is wholly impermissible and invalid u/s 119.

It was also cautioned that such policies have the propensity to influence the CsIT(A) and they will be tempted to pass an order in a particular manner so as to achieve a greater target of disposal (see The Chamber of Tax Consultants vs. CBDT 308 CTR 464).

The anxiety of the CBDT regarding the slow pace of disposal of appeals is understandable because a colossal sum of Rs. 5.71 lakh crore is locked up in these appeals.

Of this, demand of Rs. 1.15 lakh crore has been stayed by the Courts and the ITAT.

The figures of appeals pendency and the demand involved therein is as follows:

Huge pendency of appeals for more than 3 and 5 years

A clear indication of the gross inefficiency of the CsIT(A) is the pendency of appeals for more than three and five years.

There are more than 66,401 appeals pending for more than 3 years.

There is obviously no justification for appeals to be pending for such long periods at the first stage itself.

In the wake of this difficult situation, the CBDT has stipulated stiff targets for disposal of the appeals.

Each PCCIT has been directed to ensure the following disposals:

(b) Disposal of at least 40% of appeals that involve demand of Rs.10 lakhs or more in categories A2, and A3;

(d) Disposal of at least 90% of appeals that involve demand of less than Rs.2 lakhs (new category B3);

(e) Disposal of 90% of all appeals pending beyond 5 years (excluding appeals stayed by judicial authorities).

In addition, it is stated that each individual CIT (A) is expected to dispose of a minimum of 550 appeals during the financial year. 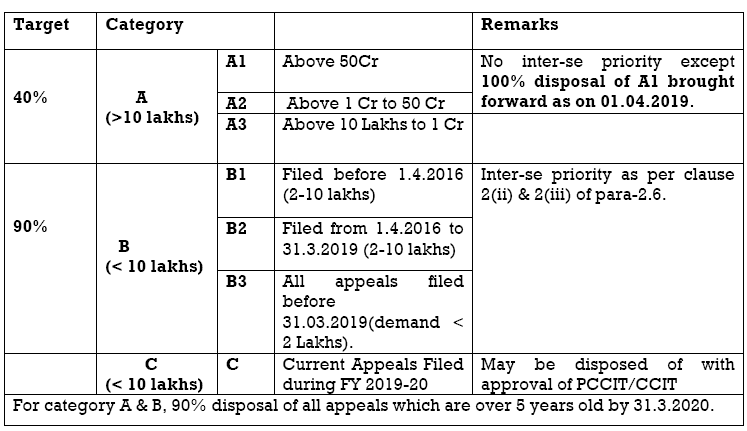 High Court cracks whip regarding pendency in the ITAT

It may be recalled that the Delhi High Court has come in hard on the pendency of appeals in the ITAT.

The Court noted that appeals are pending for 10 to 16 years.

It has directed that a tabular statement indicating the age of the old appeals as well as an action plan of the ITAT with respect to the likely time for their disposal be submitted to it (see Nokia Solutions And Networks Italia Spa vs. DDIT).

The situation in other Courts is also extremely grim.

According to the Economic Survey 2019, there are 3.5 crore cases pending in the Courts.

The Survey has made several valuable suggestions for reducing the pendency, including the proposal that the generous holidays that the Courts take should be reduced.