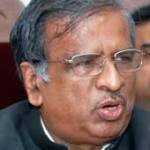 The Central Bureau of Investigation (CBI) has issued a press release regarding a case registered against Shri. G. E. Veerabhadrappa, Vice-President of the Income Tax Appellate Tribunal, Mumbai u/s13(2) r/w 13(1)(e) of the Prevention of Corruption Act 1988 for alleged possession of unaccounted assets to the tune of Rs 3.92 crores. In response, Shri. G. E. Veerabhadrappa has issued a brief statement.

Press Release By The CBI:

The Central Bureau of Investigation has registered a case on 22.07.2013 against Vice-President, Income Tax Appellate Tribunal, Mumbai U/s.13(2) r/w 13(1)(e) of the Prevention of Corruption Act-1988 for possession of alleged assets to the tune of Rs.3.92 crores (approx) which was disproportionate to his known sources of income.

After registration of the case searches were conducted at two places in Bangalore and Mumbai. Incriminating documents recovered during the searches are being scrutinized.

The investigation is continuing.

My name was cleared by Selection Committee in 2005 for the post of Vice-President in 2005 based on the Vigilance clearance on records.

My name was also considered for the post of Sr. Vice-President along with Sri Easwar obviously on the basis of clearance in 2009. Sri Eawar was selected being senior to me. I was not rejected on any Vigilance pending against me in 2009.

When Sri Easwar was elevated, I was promoted as officiating President on 14.11.2011. Subsequently, it was put up for approval of the ACC alongwith Vigilance clearance which was approved by ACC meaning that I was cleared from Vigilance angle also in 2011. Between 2011 to 2013, I have not acquired any asset which is not explained. How come all my property existing is disproportionate to all known sources of income.