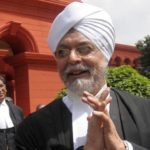 Hon’ble Jagdish Singh Khehar, who is designated as the next Chief Justice of India, is well known for his no-nonsense approach in Court.

The learned CJI designate is also well known for his firm and outspoken views.

When the learned judge was Chief Justice of the Karnataka High Court he had strongly denounced the menace of corruption by lamenting that “Karnataka State is No. 1 in corruption”.

The Learned CJI designate also once bluntly advised youngsters not to join the judiciary on the ground that “Being a judge is a tough job. It is a burnout situation“. He added that serving as a Judge in the Supreme Court is “killing” owing to the immense pressure of work.

Now it is the turn of the lawyers practicing in the Supreme Court to face the heat of the stern attitude of the learned Judge.

The learned judge has sent a strong message that he will brook no requests from lawyers for adjournments on frivolous grounds.

The ET reported that an unfortunate situation arose a few days ago. A Bench president over by Justice Khehar faced the embarrassment of having to adjourn every single matter because the lawyers for the parties were either not prepared to argue the matter or requested for a pass over on the ground that their counsel was on his legs in another Court room.

“What is happening? Why is everybody in a holiday mood?” Justice Khehar demanded to know in an angry tone.

Another lawyer pleaded for an adjournment on the ground that he had no papers.

“Here, take my file and argue the matter,” Justice Khehar offered helpfully even as the lawyer smiled sheepishly and persisted in the request for adjournment.

Ultimately, the Court got exasperated at the sorry state of affairs and stormed off.

“Call us when the lawyers are ready” the learned Judges told the Court staff as they walked away with a heavy heart.

Dushyant Dave, eminent senior advocate and president of the Bar Association, came down heavily on the lawyers for their irresponsible attitude.

“This is very unfortunate. The bar must realise that they have a responsibility towards the litigant. In any other country, you would have to face serious consequences by way of consumer court cases and complaints to the bar councils” he was quoted as saying.

Eminent Jurist Soli Sorabjee is a staunch critic of the tendency of the lawyers to seek adjournment and of the liberal attitude of the Courts to grant it. It is “utter nonsense” and the “greatest curse” he said and suggested that lawyers must be brought under the Consumer Protection Act as a way to deal with the problem. He also lamented that there are certain counsels who specialize as “adjournment counsel” and thrive on securing adjournments.

The frustrations of the public at the prevalent “adjournment culture” is immortalized in the blockbuster movie “Damini” where the protagonist laments the liberal attitude of the Court in giving “tareek pe tareek” (date after date).

The anguish is also beautifully depicted in a commercial for Greenply. Two young lawyers are arguing a matter about a buffalo which apparently caused damages to the Plaintiff, prompting him to seek damages from the owner of the buffalo. The Respondent’s demand is that the buffalo, being the alleged culprit, must be produced in court as a witness. This leads to an uproar in the court and promps the judge to adjourn the matter. Months turn to years and decades go by and the lawyers and the judge, now sprightly octogenarians, are still at the same stage at which they were at the beginning of the case. The plywood table stands mute spectator to the going-ons in the court room with the voice-over saying tongue-in-cheek “Chalta Rahe, Chalta Rahe” (It goes on and on).

Unfortunately, it does not look like things will change in a hurry.

When Chief Justice RM Lodha took over the reins he said on the very first day of his taking charge: “The culture of adjournment has to go. Seeking adjournment of scheduled hearing of cases at the drop of a hat must go. Unless a lawyer falls very ill, requests for adjournment must not be made”.

This was repeated by Hon’ble H. L. Dattu, when he was designated Chief Justice of India. He directed all Courts to “discourage the practice of frequent adjournments sought by lawyers to ensure speedy justice”.

Hon’ble Chief Justice TS Thakur also expressed the same sentiments when he shed tears at the mounting arrears in the Courts.

However, the ground reality is that the Judges are loath to take a stern stand in practice. They are reluctant to decide matters ex-parte and do end up granting adjournments. This emboldens the lawyers into believing that the threats issued by the Courts are mere lip-service and that they will still be accommodated for their frivolous requests for adjournments.

The only solution is for the Courts to turn ultra strict and start dismissing matters whenever a request for adjournment is made. This stern attitude will send the much needed signal to the advocates’ community that the Court means what it says and there will be a sea-change in their attitude!