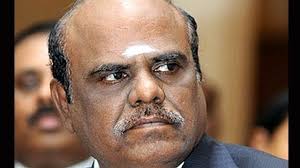 In a historic and unprecedented decision, a seven judge Bench of the Supreme Court has initiated contempt of Court proceedings against a sitting judge of the High Court. The learned Judge has been barred from handling any administrative or judicial work. He has been directed to remain personally present in Court to show-cause and explain his conduct.

The order dated 8th February 2017 passed by the said seven Judge Bench of the Supreme Court makes for sad reading:

2. The Registry is directed to ensure, that a copy of this order, and the letters taken note of while issuing notice, are furnished to Shri Justice C.S.Karnan, during the course of the day, through the Registrar General of the Calcutta High Court.

3. Shri Justice C.S.Karnan, shall forthwith refrain from handling any judicial or administrative work, as may have been assigned to him, in furtherance of the office held by him. He is also directed to return, all judicial and administrative files in his possession, to the Registrar General of the High Court immediately.

4. Shri Justice C.S.Karnan shall remain present in Court in person, on the next date of hearing, to show cause.

Legal circles are, however, not surprised at the turn of events because Justice Karnan, now in the Calcutta High Court, is not a stranger to controversy.

Allegations of corruption against sitting judges

Justice Karnan addressed an “open letter” dated 23rd January 2017 to the Hon’ble Prime Minister Narendra Modi, by which he furnished “an initial list of corrupt judges” in which 20 judges of the Supreme Court and high courts were named. He described it as “high corruption at the judiciary”.

Allegation in letter are “slanderous” and “disparaging“: AG

Shri. Mukul Rohatgi, the Attorney General of India, appears to have spearheaded the Supreme Court’s action. He was reported as saying that action must be taken against the learned judge as the letters written by him to authorities bring disrepute to the judicial system. He called it “slanderous” and “disparaging” to the system of administration of justice.

In 2015, Justice Karnan had plunged Madras HC into a major crisis by threatening contempt of court proceedings against Chief Justice Sanjay K Kaul, who has now been recommended by the collegium to be appointed as a judge of the SC. The learned Judge accused the learned Chief Justice of “interfering in his judicial work” and sought a CBI probe into the alleged forged educational qualification of another High Court judge.

“Stay” of the Supreme Court’s order of transfer

When he was transferred by the Supreme Court, Justice Karnan passed an order by which he “stayed” the order of the SC and “advised” the Hon’ble Supreme Court of India to “not interfere in his jurisdiction“. Subsequently, the learned judge accepted his transfer.

Legal implications of a guilty verdict?

The TOI has raised the question as to the legal implications of the learned Judge being held guilty of contempt. If there is a sentence of jail, will the learned judge automatically lose his position as High Court judge or will the Bench have to make a recommendation to Parliament for his removal?

It is pointed out that under the Constitution, the only process for sacking a judge of the SC or HC is through a removal motion passed by a two-thirds majority in each House of Parliament. Till date, no judge has been removed by Parliament though such motions were initiated thrice.

Past precedents where Parliament has sought to remove a judge

There are three precedents where a sitting judge was sought to be removed from office by Parliament:

(i) A removal motion against Justice V Ramaswami was defeated in Parliament in May 1993 with the help of abstaining Congress MPs.

(ii) Sikkim HC Chief Justice P D Dinakaran resigned in July 2011 ahead of the initiation of a removal motion against him in the Rajya Sabha.

(iii) Justice Soumitra Sen of the Calcutta HC argued his case unsuccessfully before the Rajya Sabha which passed the motion for his removal, but Sen resigned before the Lok Sabha could take up the motion.

The case of Justice (Retd) Markandey Katju comes readily to mind. The learned ex-judge is known for making colourful comments on his blog and also on twitter on all sundry issues.

One such comment irked the Supreme Court and it passed a terse order asking him to show-cause:

“Prima facie, the statements made seem to be an attack on the Judges and not on the judgment. We, therefore, issue notice of contempt to show cause why contempt proceedings should not be drawn up against Justice Markandey Katju and he be appropriately dealt with”.

Fortunately, the learned former judge issued an “unconditional apology” and the Supreme Court “closed the case” before further damage was done.

SC closed the contempt case against its Markandey Katju after accepting an unconditional apology tendered by him https://t.co/cZ7nc0PwXg

The law of contempt explained

Abhinav Chandrachud, an expert on the subject, has explained the entire law of contempt of Court. He has argued that while courts must have powers to preserve the dignity and decorum of day-to-day proceedings, wild and scurrilous abuse heaped on judges on blogs or social media websites are perhaps best left ignored.