Kanga and Palkhivala’s – The Law and Practice of Income Tax (in 2 vols) has just been released. The book is a must-have for all tax professionals 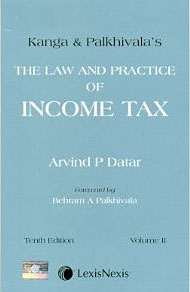 Nani Palkhivala had a unique ability which spearheaded his great success in all walks of life: the ability to put complex propositions of law in a simple and easy-to-understand manner.

You could see the real impact of Palkhivala’s magic in the Budget speeches that he gave annually at Brabourne stadium. Lay people, who had no knowledge of, or interest in, complex fiscal issues, used to throng the stadium in their thousands and wait patiently for hours, only to hear Palkhivala speak. He cast a spell on them, explaining issues with such clarity that they were enchanted.

The first edition of Kanga & Palkhivala’s ‘The Law & Practice of income-tax’ was released in 1950 when Palkhivala was in top practice, though he was only 2 years in the profession. The success of the book triggered off a misconceived “copyright-infringement suit” by Sampath Iyengar, the author of the tome “Law of Income-tax”. Iyengar argued that Palkhivala had “copied” from his (Iyengar’s) book, a claim that would appear blasphemous to people even today. Sampath Iyengar was an accomplished lawyer in his own right and how he meticulously built his case against Palkhivala and how Palhivala defended himself successfully is a fascinating and compelling story in itself, which you can read here.

For the past several decades, Kanga & Palkhivala has been a mainstay for all tax professionals. If you are hurriedly looking for an answer to a query, or a citation to support a proposition, a quick look at the relevant section in the book would give you the authoritative answer.

After Palkhivala’s demise, the publishers got Dinesh Vyas, eminent Supreme Court advocate, to update the book. He did a remarkable job, ensuring that the core of Kanga & Palkhivala was left untouched and only necessary updates were added.

In the latest edition, the publishers have done well to put the responsibility of updating the treatise on the broad shoulders of Arvind Datar.

Arvind Datar is an eminent advocate in his own right and has appeared in several leading matters such as Shaan Finance 231 ITR 308 (SC), Southern Technologies 320 ITR 577 (SC), Vodafone International Holdings 329 ITR 126 (SC), Sanofi Pasteur Holdings 354 ITR 316 (AP) etc. You can be sure that he knows the nitty-gritty of the law and the practical issues that need to be examined.

Arvind Datar is also a prolific author with several best-selling legal books like ‘Nani Palkhivala: The Courtroom Genius‘, ‘Datar Commentary on Constitution of India‘, ‘Guide to Central Excise Law and Practice: With Accounting Practices‘ etc to his credit.

The advantage of reading a book written by a lawyer-cum-author is that unlike academicians who like to meander about and pontificate on theoretical issues, Arvind Datar comes straightaway to the core issue and answers it with clarity and in a succinct manner.

You can see an example of this in the commentary on the taxability of “fees for technical services” and “royalty”. The entire law on the subject has been unsettled by a maze of retrospective amendments. The author explains the entire law in its proper perspective but does not mince words in criticizing the retrospective amendments. Similarly, on the controversial issue of whether fees for license of software are taxable as “copyright royalty” or not, the author provides an objective analysis of the stand point of the opposite parties but then explains what according to him is the correct position in law. He also explains why the High Court judgements which hold that licensing of software is taxable as “royalty” are not, in his view, correct.

Similarly, you will find the commentary on the law of transfer pricing quite illuminating. One can sense the depth of the author’s expertise in the subject. He has also referred to all the important and landmark judgements on the issue.

The other USP of the book is that the Index is arranged topic-wise. So, if you are looking for the law on, say, “Mistake of lawyer or accountant” or “Order or notice issued under wrong section”, you can easily find it.

Yet another advantage of the book is that it comes with a CD. The CD contains the entire text of the Income-tax Act (1922 and 1961), the Income-tax Rules, the Double Taxation Avoidance Agreements, important Circulars and all allied Acts and Rules.

It is clear that the book has been designed for the busy professional who wants answers on his finger tips. The credit for this has to go to Nani Palkhivala who anticipated what the reader was likely to be looking for and provided clear cut answers. The author has taken this feature further and improved upon it.

All in all, it must be said that Kanga & Palkhivala is a delight to read. It has the familiarity of Nani Palkhivala’s style of concise and succinct commentary with the added advantage of all the latest case laws. The pricing of the book is also very reasonable when compared to the commentaries by Sampath Iyengar and Chaturvedi & Pithisaria. There is no doubt that this treatise is a must-have for all tax professionals.