Tax Wiz And Eminent Lawyer Is The New Law Minister 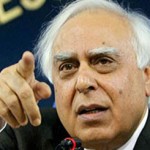 We are pleased to announce that eminent senior advocate and tax expert Shri Kapil Sibal has been appointed the Law Minister of India. Shri. Kapil Sibal’s father, Shri. H. L. Sibal, was an eminent tax counsel and has appeared in hundreds of tax matters. Shri. Kapil Sibal has also appeared in a number of landmark tax matters such as HY Lay Poultry Farms vs. State (1977) CTR (SC) 169, Mardia Chemicals vs. UOI 136 TM 360 (SC), Bansal Commodities vs. UOI 189 ITR 62 (Del) etc. He has an excellent grasp of all legal and tax issues and is well aware of the problems being faced by the tax payers in the Country. He is also well known for his humane and sympathetic approach while dealing with the problems of the citizens.

(ii) Judicial inquiry into the issues raised by the Bar in its letter dated 9.3.2012 regarding alleged corruption in the Tribunal;