editor Posted in All Information, Others — 12 Comments ↓ 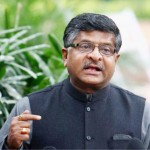 The re-appointment of Hon’ble Shri. Ravi Shankar Prasad as the Law Minister augers well for taxpayers and tax professionals.

Shri. Ravi Shankar Prasad has an excellent grasp on income-tax law and has appeared as Counsel in leading matters such as J. Jayalalitha vs. ACWT 309 ITR 277 (Mad) (prosecution for non-filing of return), Sushil Kumar Modi In Re 104 TM 666 (Pat) (tax implications of animal husbandry scam) etc.

Shri. Ravi Shankar Prasad has declared on a number of occasions that he has no tolerance for corruption. One can hope that he will weed out the rampant corruption that is prevailing in the income-tax department.

It may be recalled that on an earlier occasion, the Government has dismissed several high-ranking IRS officials from service for engaging in extortion and blackmailing hapless taxpayers. One can expect that this momentum will be maintained under the stewardship of Shri. Ravi Shankar Prasad (See Acche Din Finally! NAMO Busts Den Of Corruption In Income-Tax Dept And Sacks Top IRS Officers For Harassing Taxpayers).

Shri. Ravi Shankar Prasad is also expected to leverage on the expertise on digitisation that he gained as I&B Minister. One can expect that the records of all income-tax payers will be digitized soon and be available at the click of a button. This will curb the proliferation of black money in the Country and instil fear in unscrupulous tax payers.

One long standing demand of the Tax Bar that is likely to see the light of day is the placement of Benches of the Supreme Court across the Country. An alternative proposal suggested by the Tax Bar is that there should be e-Courts in the Supreme Court so that litigants across the Country are able to argue their cases without having to spend the time and money to visit New Delhi.

The Bar Association is also hopeful that the new Law Minister will address the other long-standing demands of the taxpayers, namely that of appointment of Vice Presidents in the ITAT and increasing the age limits for Judges & Tribunal Members from 62 years to 65 years.

The Bar is very confident that these long-standing issues will be speedily resolved under the dynamic leadership of Shri. Ravi Shankar Prasad.

We wish the Hon’ble Minister good luck in his new posting.