editor Posted in All Information, ITAT related, Others, Procedures/Guidelines — No Comments ↓

The speed with which the Law Ministry and the ITAT have moved with regard to the setting up of the new Bench at Surat has impressed tax professionals and taxpayers.

It may be recalled that a representation was made by the Tax Bar that it is not convenient for the taxpayers in Surat to travel to Ahmedabad for the hearing of their appeals and that a Bench should be set up in Surat.

Shri. Ravi Shankar, the Hon’ble Union Minister of Law & Justice, readily accepted the said request at the ITAT Members Residential Refresher Course which was held from 16th to 23rd July 2017.

Thereafter, the wheels of the Government have moved very fast.

On 1st September 2017, the Surat Bench was formally inaugurated by the Hon’ble Law Minister at a glittering function.

The function was well attended by several dignitaries. 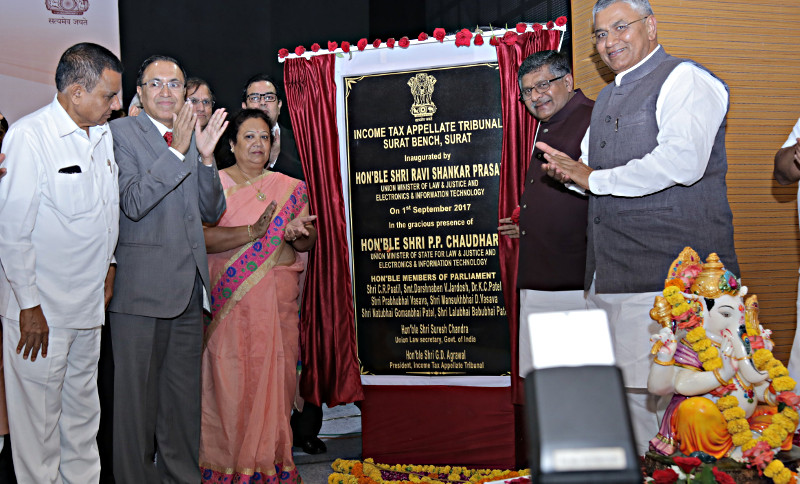 The foundation stone of the Surat Bench (click for larger image)

A large number of taxpayers and tax professionals from Surat, Ahmedbad, Rajkot and other cities were also present.

The move to set up the Bench in Surat was heartily welcomed by taxpayers.

There are over 3,000 appeals pending for disposal. This is more than double the average pendency per bench all over the country.

The new Bench will have jurisdiction in respect of the taxpayers assessed to tax by the Assessing Officers in Surat, Bharuch, Dang, Narmada, Navsari, Tapi, Valsad and Union Territories of Diu, Dadra and Nagar Haveli.

Surat will be the 28th city in the country to have a Bench of the ITAT. 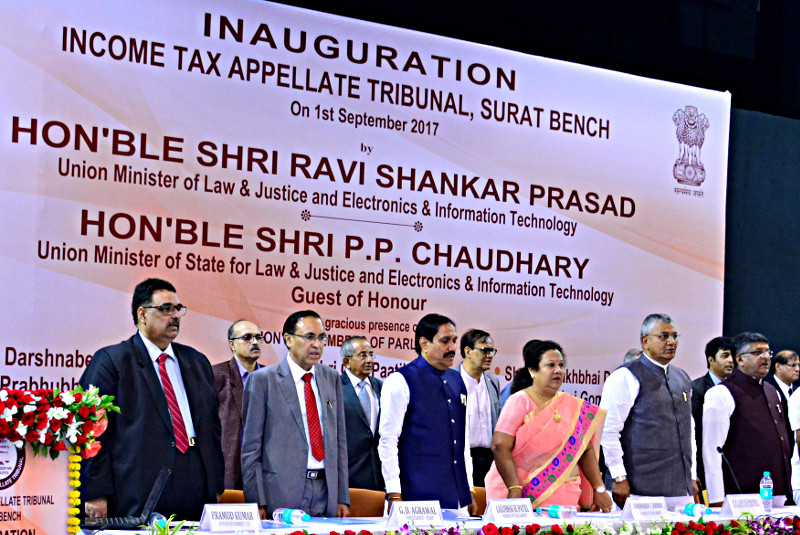 The Hon’ble Dignitaries on the dias (click for larger image)

Genuine grievances of taxpayers will be resolved speedily

Shri Ravi Shankar Prasad assured the distinguished audience that the Government is committed to resolving all grievances of taxpayers in a speedy and efficient manner.

He also took the opportunity to remind taxpayers that they are expected to reciprocate by contributing to the cause of nation-building by paying their taxes in an honest manner.

He emphasized that taxpayers and tax professionals have to always bear in mind the “laxman rekha” between “tax planning” and “tax evasion”.

A cross section of the distinguished audience (click for larger image)

He emphasized that the ITAT is doing excellent work in dispensing justice and has become an inspiration for the many other successful Tribunals being set up in the country.

The learned Minister also recalled the fond association that the late jurist Nani Palkhivala had with the ITAT.

He reminded the distinguished audience that the continued effectiveness of the institution depends greatly on the credibility and stature of people practicing in the forum, as also on the people manning the institution.

He urged all stakeholders to maintain the highest standards of conduct, knowledge and professionalism in their work, and to find innovative methods of speedily deal with the pending matters.

Workshop on Effective Representation before the ITAT

In the morning session, a workshop on ‘Effective Representation before the ITAT’ was conducted by Shri Ajay Wadhva, President, ITAT Bar Association, New Delhi.

In the afternoon session, a Moot Court was conducted so as to familiarize young tax professionals with the proceedings in the ITAT’s court rooms.

The Moot Court was conducted by serving Members of the ITAT, led by Shri Rajpal Yadav, Judicial Member, ITAT, Ahmedabad

The workshop and the moot court were greatly appreciated by the taxpayers and the tax professionals.

“The setting up of the Surat Bench of the ITAT in a record time of 45 days from the date of announcement by the Hon’ble Law Minister, Shri Ravi Shankar Prasad at the Inaugural function of “All India Income tax Appellate Tribunal Members, 7 day Residential Refresher Course 2017” on 16th July 2017, is indeed commendable. This is a very positive step taken towards reducing pendency and at the same time will be cost effective for litigants in and around Surat. It may also prove to be the forerunner to the setting up of other Benches at different stations,” Ms. Arati Vissanji, the President of the ITAT Bar Association, Mumbai, said.

A similar sentiment was expressed by Ms. Premlata Bansal, National President of the AIFTP.

“Heartiest congratulation to Honourable law Minister, Shri Ravishankar Prasad for inaugurating ITAT Bench at Surat on 01/09/2017. We are sure that all the tax payers of Surat Region will immensely benefit by having two regular Benches at Surat. I request the Surat Tribunal Bar Association to join the AIFTP to strengthen the ITAT Bar Associations co-ordination Committee, to make effective representation as regards the issues relating to ITAT for better administration of Justice,” she said.

“Congratulations for opening of Income-Tax-Tribunal Bench in Surat, the Diamond Capital of India and largest producer of man-made fibre in Country. Since, I hail from Surat I feel doubly happy for the city, with excellent Tax Bar and large number of Taxpaying public,” the eminent jurist said. .