Home › All Information › India Will Have The Best Tax Regime In The World: New CBDT Chief

India Will Have The Best Tax Regime In The World: New CBDT Chief

editor Posted in All Information, Others — 4 Comments ↓ 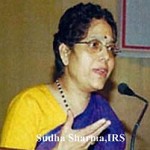 The CBDT has issued Office Order No. 127/2013 dated 14.06.2013 stating that the President of India has appointed Ms. Sudha Sharma as Chairperson of the Central Board of Direct Taxes (CBDT) in the pay scale of Rs. 80,000 (fixed) with the status of Special Secretary to the Government. Upon taking charge, Ms. Sudha Sharma addressed a letter in which she pointed out that that the guiding principles of “non-intrusive” and “non-adversarial” tax administration as laid down by the Finance Minister has to be followed by the department in its day-to-day working. She also emphasized that the department has to create an environment for voluntary compliance. She pointed out that as tax collectors of the country, the tax department has a pivotal role to play in national growth and has to achieve the huge target of budget collection. She emphasized that the potential for tax collection is much higher given that there is a base of only about 3.5 crore assesses, a mere 2.9% of the national population, of which only 42,800 declares annual income over Rs. 1 crore. She stated that while the endeavour would be to promote voluntary compliance and provide hassle-free service to the honest tax payers, focus would need to be kept on non-filers and stop-filers in order in order to enhance the tax base and augment tax collection. She also stated that the department is aiming at achieving a tax regulation regimen in India which can match the best in the world.

4 comments on “India Will Have The Best Tax Regime In The World: New CBDT Chief”

1 Pings/Trackbacks for "India Will Have The Best Tax Regime In The World: New CBDT Chief"